A Couple of Quick Projects

A Creative Dreamer's challenge for the month of December is "Home." I'm not sure anything could be more appropriate! As usual, at first I was flabbergasted at the range of possibilities, especially since there are no rules as to how we interpret the challenge. It didn't take long for me to think of the orphan house blocks in my stash however. There aren't a lot left at this point but there were a couple that I had designed and sewn up several years ago. One seemed particularly suited to this challenge. All I had to do was add a bit of landscaping.

There's something magical about the twilight hour, that brief space of time when day and night co-exist. Lights come on in houses, giving them a warm and cozy appearance from outside. 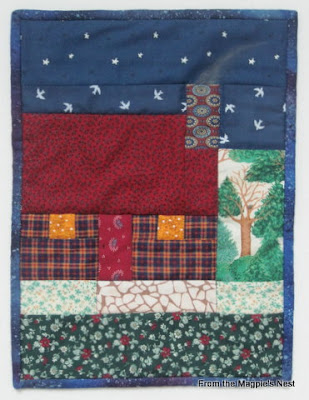 Around here at this time of the year the trumpeter swans are making their commute from the farm fields where they've been feeding during the day to wherever it is they spend the nights. It's a special joy for me to hear them as they pass overhead. They may have been the inspiration for the title of this Priority Quilt for the Alzheimer's Art Quilt Initiative: "Coming Home to Roost."

I was tempted to add some beads for sparkle in the night sky. I decided to keep it simple this time around though. Instead I used chalk pastels to create smoke coming out of the chimney and a bit of Micron pen ink to add a nest in the tree. 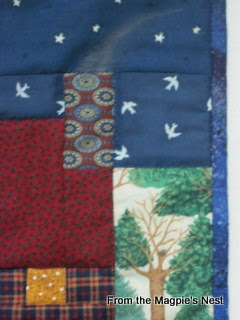 This quilt has already received its' registration number, 6280, and with any kind of luck will be on its' way to AAQI's quilt processing facility tomorrow. ;- )
When I could no longer go to the beauty school to get my hair cut every 6-8 weeks I found a gal who makes house calls. She's very diligent about coming over as scent-free as she can manage. I made her a pair of potholders this week to show my appreciation. There are a couple more little projects I'd like to get finished before the end of the year. I may get a burst of creativity after Christmas and get a back made for my "Play Group" friendship quilt but right now I'm not feelin' it. I may have to spend some time playing in my scraps or with orphan blocks while everyone else is away at Christmas parties...