Shortly after my last post I started beading around the button and the heart beads, just backstitching. I used some tiny iridescent beads around the hearts. They're not delicas; they may be something like a 15. I suspect they are some Mill Hill beads I picked up in my travels and repackaged at home because they are not labeled. I used another clear seed bead to bead over parts of the button to hold it in place. It looks better than I thought it would. Later I went back in and slipped a couple of threads under the bead strands to further secure the button in place per Bobbi and Robin's suggestions. 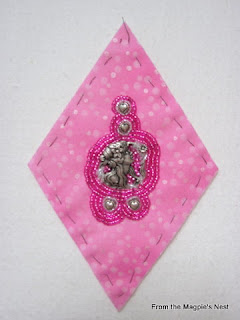 I had two choices in pink seed beads to use for the background areas. One set were slightly smaller and slightly lighter in color than the other. I used the smaller ones inside the button (per Dot's suggestion) and the darker, larger ones around the outside. Unfortunately I discovered that the larger beads were less uniform in size and shape than I thought they were. So in two respects I think the smaller, lighter color beads might have been the better choice: 1) there isn't as much contrast between the button and the surrounding beads as I would like, and 2) the pink beads overwhelmed the iridescent beads around the hearts. I think my soft cotton batting is playing a role in the matter as well. I suspect if I had used paper or some other stiffer interfacing behind my fabric I might not have placed the beads so closely together that they crowd each other and consequently don't lay as flat as I'd like. 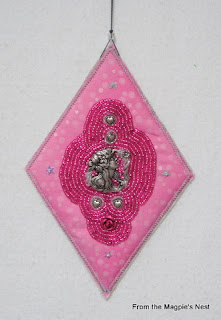 As I worked my way around the lower pair of hearts I became concerned about the concentric circles creating an undesirable effect. I also wanted to extend the beading further south somehow to balance out the design. The cool metal rose bead did the job nicely without distracting too much from the real focal points of the piece. 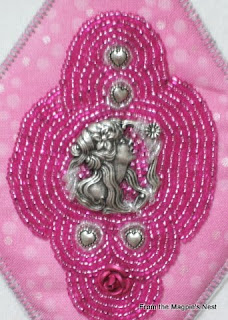 I was so excited about finishing this that I neglected to change the settings on my sewing machine when I went to mount the beadwork onto the backing. Normally I set it to stitch a rather wide and open blanket stitch around the perimeter. This tight close stitching contributed to some puckering of the exposed fabric and made it harder to pull an embroidery needle through the top to add a hanging loop. (sigh) None of these "errors" I've pointed out are worth taking out or doing over. I'm looking at this as a learning experience, even though this piece has so much meaning to me that I'd really have preferred it to have turned out perfectly. Life is not perfect, why should my handwork be perfect? (If I keep saying that to myself maybe I'll eventually come to believe it!)
Oh, and just so you know, the lady represents my daughter and each heart represents one of her children. The firstborn at the top, the second one just below, and the twins side by side at the bottom. The layout of this design is probably the part I'm the happiest with. All I need now is a title. :- )