We had a lovely Thanksgiving. I made a point of putting the camera out in the living room where I expected I would be spending the most time with the granddaughters. The intention was to get pictures of them and their mother 'cause, you know, they're so cute and we don't get to see them that often. It didn't happen. I was so busy actually playing with the girls that it never occurred to me to use the camera. Duh!

By yesterday everyone was gone and most of the mess in the kitchen had been dealt with. Like Sharon over at Indigo Threads I needed to sew. I wasn't in the right frame of mind to begin making blocks for my granddaughter's new quilt so I dumped out my bag of pink-to-burgundy scraps. 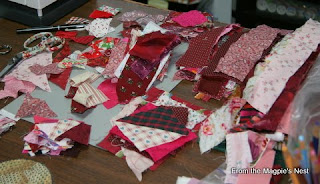 I sorted them roughly by size and shape and started sewing the smallest bits together. Much later I had ten 4.5" crumb blocks: 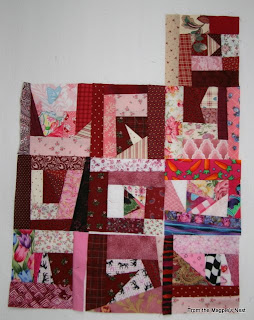 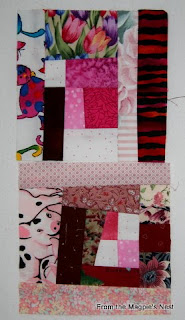 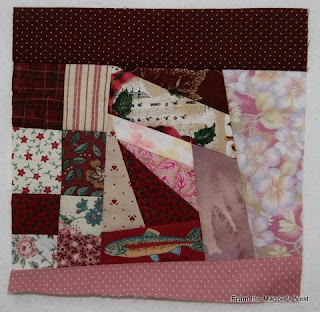 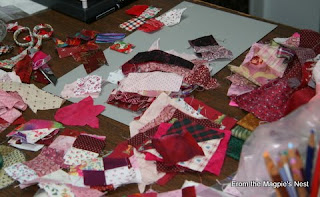 The piles are smaller but far from being gone altogether. ;- )
This has me thinking about better ways to collect and store my littlest scraps. I don't expect to tackle this job until after the holidays but there are definitely some ideas percolating. For the last few years I've had sort of an overarching theme or goal for each year. One year was dealing with my UFO's, deciding which ones I wanted to finish and how soon. 2008 was a year of learning and experimentation. I think my theme for next year is going to be scraps. It's time to get that beast under control. I don't intend to use them all up or anything drastic like that. I just want to get to a place where I feel like I have a system that works for me for collecting and storing and using them.
Now I have to clean up the sewing table once again so I can finally get started on that DGD quilt!