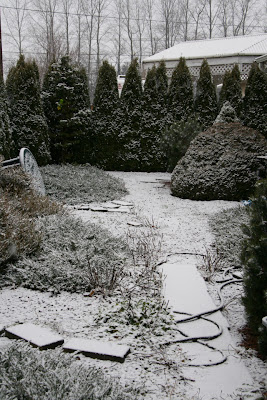 This is what I woke up to this morning. It was still coming down then too. Now, a few hours later, it's all gone. Well, except for the layer on top of the ice in the birdbath (poor birds). It was pretty while it lasted, and it sure put me in the mood to decorate the Christmas tree. Too bad we still don't have one. We bequeathed our ancient plastic tree to DD a few years ago and have been getting cut trees ever since. Which is what I grew up with and prefer actually.

All of our holiday decorations are still in their trunk out in the garage too. I can't go get them because the garage is currently full of toxic fumes from the printer. DH has been printing out some of the photographs he took yesterday. At least the living room is back in order after the chaos of the photo shoot. DD had three sets of pictures she wanted to try to get; we were lucky to get one! Miss Margaret does NOT like to have her picture taken. You'll have to take my word for it that she and her sister looked adorable in their Christmas dresses because those were the pictures we did not get. When DH gets done fiddling with the images maybe I can post a couple of the shots we did get here. In the meantime, here's Miss M playing peek-a-boo with me last week: 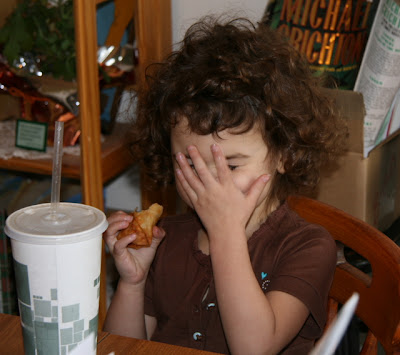 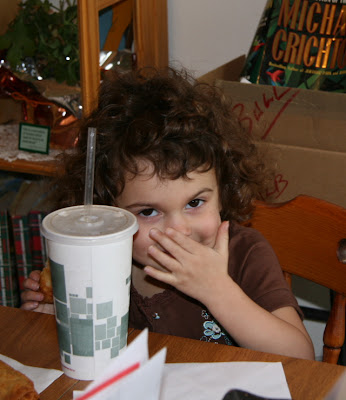 Those of you who cruise the quilting and crafty blogs may have seen the Pay It Forward challenges going around. I was too slow to get in on a couple of them, and had concerns about being able to fulfill the obliagation if I did commit to participating. But yesterday I saw that BeadBabe over at Beading at the Beach is playing. I signed up quickly so I could get one of her beaded face pins! Now it's my turn to offer the challenge. Essentially I'm offering something I've made with my very own two hands to the first three people to sign up. When you sign up, however, you have to commit to "pay it forward" by doing the same for three other people. The first time I saw this challenge on someone's blog they stipulated that they had a year to fulfill their obligation to make and send three gifts. I'm adding that caveat to my offer as well ;- ) At this point I haven't decided precisely what I will make for my recipients. (Some bloggers have been specific, others have left it open-ended.) I am mulling over the possibilities... Stay tuned for further developments! If you sign up today by leaving a comment I may even consider taking special requests!