The Final Bead Round Robin Block

I mentioned that I had received the last two blocks from the Bead Round Robin shortly before Christmas. The first one is back with its' owner now. I added some buttons and beads to it but neglected to get pictures before sending it off. I've done better with the second one! Here it is as I received it: 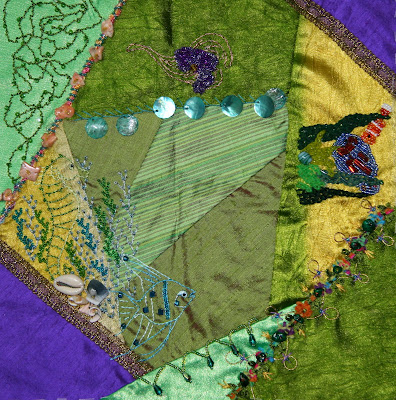 And this is how it looks now: 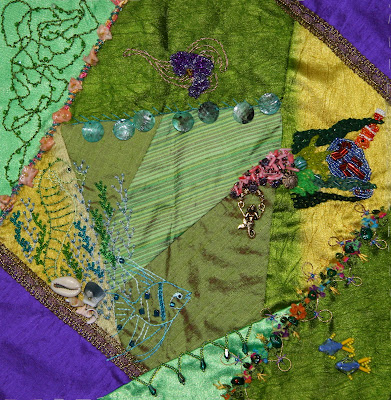 I have to admit that I had a lot of fun shopping for beads for this one. I bought pink coral pieces, blue glass diamonds that glow in the dark, some pink flower beads I didn't use and purple flowers I did use. There were two other tubes of purple beads I ended up not using but that's okay, I'll use them eventually. I wanted to put a mermaid on the block, maybe to fill the empty space right in the middle, but I was afraid to try a big motif. When I saw that mermaid charm I had to have it! 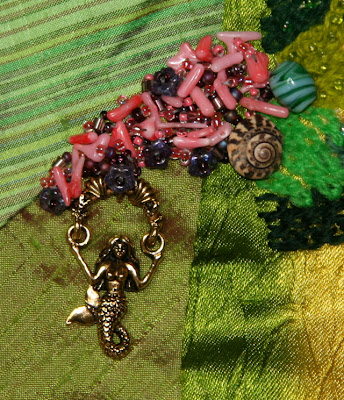 The mossing of the beads to create a grotto for the mermaid's swing to hang from didn't develop quite the way I had imagined it would but I'm happy with the results. A couple of pieces of the coral broke while I was working with it. Some of the holes were too small for the straw needle I was using.

I turned the blue gow-in-the-dark beads into the bodies of a pair of fish: 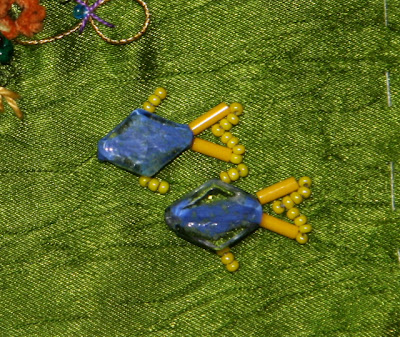 Give me the opportunity to be whimsical and I'm good to go! I could easily do more to this block but I'm going to send it on its' way so the owner can finish it up in a way that suits her.
Posted by Magpie Sue at 5:15 PM