I had so much fun working with the scrappy batik blocks last week that I just kept going. Before I knew it I had a flimsy of 42 blocks on the wall. 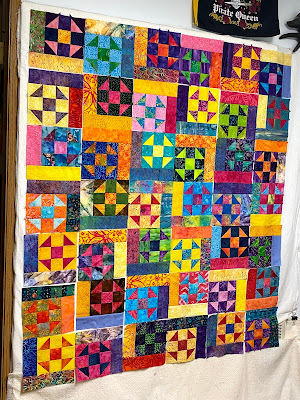 There was much tweaking of block placements but eventually I got them all sewn together. Then I learned that a young friend of mine might be leaving the country soon to fulfill a mission for our church. She has expressed appreciation for the quilts I'd made that she's seen, and even went so far as to exclaim, "I want a quilt!" I don't think she meant to say it loud enough for me to hear but I did hear her. 😉 That meant the quilt top needed to be made bigger.

It took me a couple of days to wrap my head around how to add length to this flimsy. Many of those batik prints had been used up or there wasn't much left. I was reluctant to introduce many new prints or make more blocks. Finally I pulled out Window blocks that had been made about the same time as all the Shoo-fly blocks and built a pair of borders. I had to be flexible with the sashing between those blocks as there wasn't enough of the print I'd used to frame the flimsy, nor did they fit precisely within the width I had created. 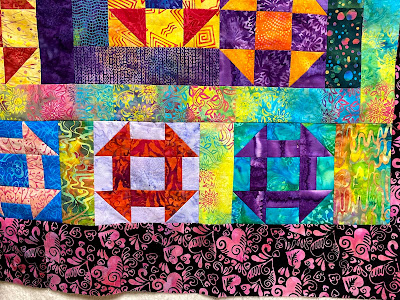 You can see that I used another batik for an outer border. It was also from my stash, not recently purchased. I was surprised that it worked so well to frame the quilt when it was such a stark contrast to what was going on in the middle. 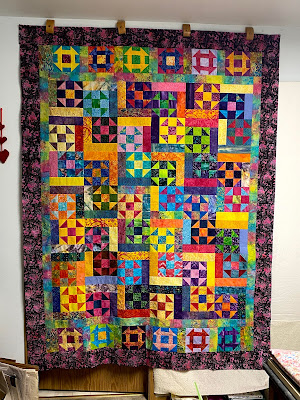 The photo doesn't do it justice. It really sings in person. I love this quilt! Well, quilt-to-be. We went out today and purchased yardage to back this 60"x 80" top. James has a variegated thread he thinks will work for the interior, which will probably be done in an allover pattern. Not quite sure how the border will be handled. I also bought a bit of yardage for binding. I'll get that made while he's doing the quilting. Hopefully I'll be able to manage getting the binding applied and sewn down before my friend leaves the area. I'd like her to be able to take it with her when she leaves our summer weather for winter in the southern hemisphere. 😁