The End of Summer

I'm referring to my Summer Scroll, (otherwise known as a stitch wrap) bits of which you've seen in past posts. Most recently the length of scroll looked like this:

There's been some detail stitching added since then but more significantly I've added what I expect to be the last two sections. 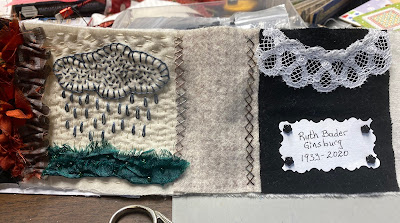 You can see that I've done some stitching around the rain cloud that was at the end of the strip previously. Then I added a lovely piece of wool followed by black flannel. 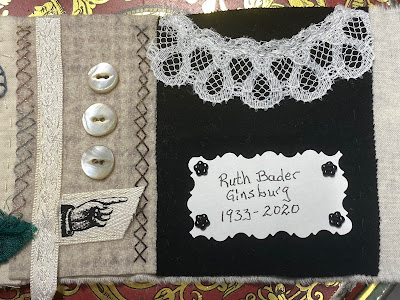 I've wanted to honor Justice Ruth Bade Ginsburg ever since she passed in September. It took some time to come up with the right black to represent her robes. Originally I thought I would embroider a facsimile of a lace collar, her trademark while serving on our Supreme Court. My first attempt didn't look good to me so this has been stalled for a while. Today I dug through my stash on the hunt for something else and came up with this bit of lace. Perfect! The inscription tag is a bit of watercolor paper I cut out with special paper scissors.
I've dubbed this my Summer Scroll because it was started back in June under the influence of Anne Brooke and Tilly Rose. These ladies created projects to help folks cope with the first covid lockdown in the UK. As usual, I was a little late to the party, not beginning until June. Mine became a sort of visual journal for me personally as well as a place to practice and experiment with different types of stitches and embellishments. I decided to call a halt to it around the autumn equinox as the longer it got the more awkward it was to work on. That also seemed fitting as it had begun around the summer solstice.  Recently I've started a second scroll. I expect it to run through the winter solstice into January and maybe February. I've found this to be a very useful project. It's easy to pick up, there's no pressure, and it's a place to play with my "toys." I bought some wide lace I intend to use on the back of the Summer Scroll to protect the threads from wear and snagging. I want to find a spool or bobbin for the scroll to live on permanently before I sew the lace in place. And there's the question of how to finish the tail end of the scroll when the time comes... 😊
Posted by Magpie Sue at 8:42 PM