A Project For the End of the Year

It's been head down, nose to the grindstone around here in the days leading up to Christmas. Well, some of the time at least. There's certainly been more needlework than patchwork going on of late. As is customary at this time of the year, a lot of the stitching has been for gifts. I could probably share most of what I've made but I'll hold off for the time being. It's just easier that way. As long as I don't forget entirely!

Once the gift stitching was finished I wanted a sort of palette cleanser project. Something mindless, dead easy. While I was shopping online for gifts one of the things that found it's way into my cart was a needlepoint kit. Screen printed canvas, a needle, and DMC floss all in one neat package. Best of all, lots of large areas for basketweave stitching. 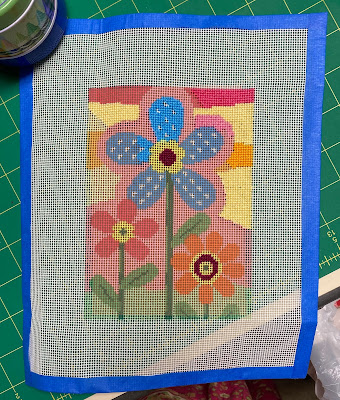 The design area is 5 x 7 inches. I debated briefly whether or not to mount this on a frame (stretcher bars) vs working it in hand. A frame would help to keep the canvas in perfect alignment. Since I stitch basketweave as much as possible I don't have a lot of issues with distortion when I stitch in hand. 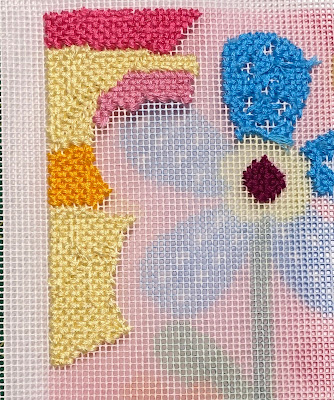 In a moment of desperation I taped the raw edges and began stitching. 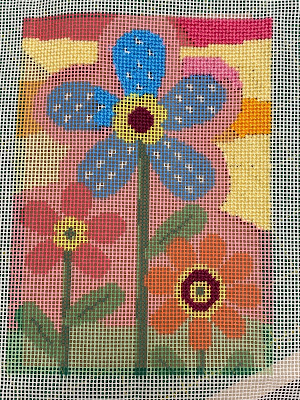 I've already spotted two places where I was supposed to put in a stitch of yellow and missed it. And of course there's the ever present issue of exactly where the color changes occur. Screen printed canvases are rarely as accurate as a hand painted canvas. A slight shift in the pattern over the course of the canvas and the whole thing ends up skewed. It drives the perfectionist in me nuts but I try not to stress over it. Since I have no idea what I'll do with this little piece in the end it's unlikely to matter one way or the other. This will just be something to do during the holidays when I'm not otherwise occupied. It's going to be a weird Christmas this year no matter what. The fewer expectations I put on myself for the next two weeks or so the better off I'll be mentally. So the other projects I have in the works are on hold at present. You never know though, I may be seized by the muse before the New Year begins and have something spectacular to share! (Well, interesting at least. 😉)