Being of a frugal Scottish background, I can't bear to throw away fabric scraps. I have various receptacles around the cutting table and sewing machine where they live until I'm moved to do something with them. Such has been the case over the last 24 hours.

The smallest triangles I consider useable are 1.875" on their perpendicular sides. They accumulate in a snack size baggie and then are paired up and stored in a five inch square box. It came to my attention that both the baggie and the box were full to overflowing. 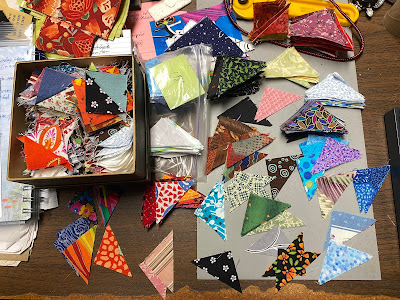 I've been industriously sewing pairs and then Broken Dishes blocks. 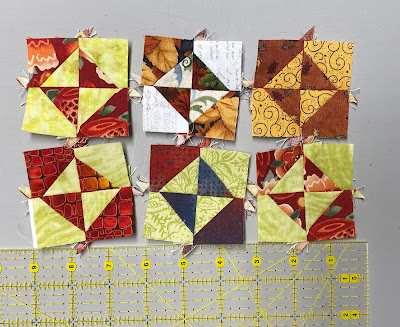 I like to leave the dog ears in place as I also like to press final seams open to help the blocks lay flatter. The dog ears give my fingers something to hang onto.

I could easily make Pinwheel blocks or some others probably. I just really like Broken Dishes (in patchwork, not on the kitchen floor). Before I called a halt today I'd completed 51 little blocks. You can see that there are still HST's to be dealt with in the box. But at least there's room for some new triangles! 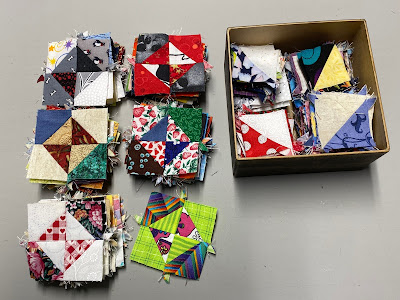 Maybe I'll do something with these for the next Scrap Happy Day (15 November). But don't hold your breath! In an ironic twist, Cathy over at Sane, Crazy, Crumby Quilting talks in her post today about what she does with her waste triangles. 😀