While my elbow is being so tender it's been easier to refrain from buying new fabric. Although that's a sad thing to have to say. That hasn't kept me from indulging in a little retail therapy however! First I bought one of Nancy's gift boxes called Return to Sleepy Hollow. 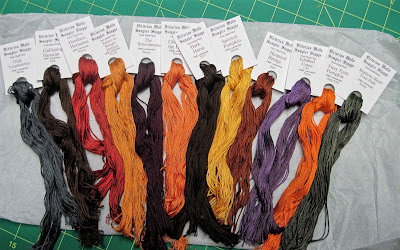 This is over and above the monthly installment I receive in the limited edition floss club. So far the shipment for November hasn't arrived yet. I only receive six skeins in my monthly installments; twelve in a box feels like a real splurge. I have to say that I am sorely tempted to just buy one of her Kindred Spirits gift boxes too, rather than keeping my fingers crossed to win a box through her current give away.

The other temptation to which I have succumbed is a bundle of patterns and floss from Sublime Stitching. 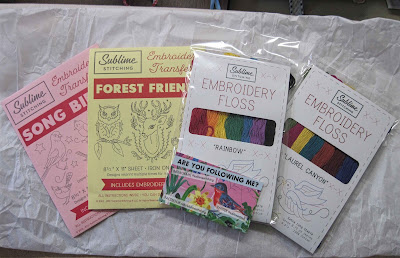 I have far more embroidery patterns than I will probably ever actually use but there are some things I can't seem to resist. You've probably already guessed I'm a sucker for color in threads and fabric. "It's my one weakness" as Dorcas Lane would say (Lark Rise to Candleford). 😉

You may have guessed that my spirits have perked up (finally, thank Goodness!). Now the trick will be not to do too much to aggravate my elbow. There's at least one quilt I had hoped to get done before Christmas so it could be shipped in time to be a gift of the season. Hard to say whether that will happen now. I am not good about pacing myself. When I begin a project I like to keep at it until it's complete (within reason). I will have to learn to work in small bites rather than gorging myself with patchwork and/or binding. {sigh} It's always something, ain't it?!