Even though things have been quiet here on the cyber front I've been puttering around in the background. I won't cram it all into one post. At least one project deserves to be spotlighted. I just have to have to have enough brain power to do it justice.

I've been itching to use some of the hand dyed flosses I've been acquiring from the Victorian Motto Sampler Shoppe. Yesterday I set up a small hoop with a quilting cotton that has a barely-there print on it. 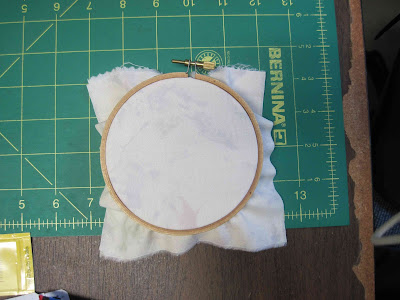 I've learned that a 4" hoop is the most comfortable fit in my small hands. I really wanted to fill this circle with embroidery but the first color I picked up was a dark green. That soon became leaves and stems for mysterious flowers. 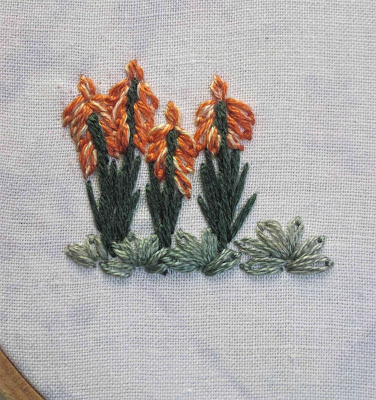 They could be red hot pokers I suppose. I wasn't striving for reality particularly. But some time ago I downloaded an e-book by Ann Bernard about how to create flowers in embroidery. I brought that up and decided to have a go at her version of black-eyed Susans. 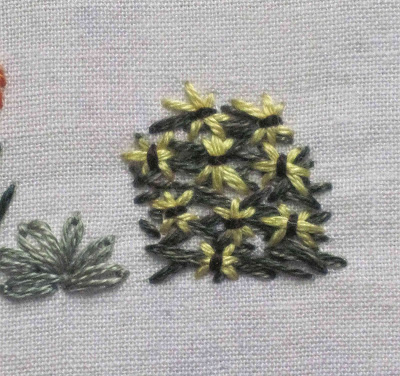 The technique was simple and fun and seemed to be effective. However, if I were to do it over again I would use a lighter green for the foliage and/or a redder brown for the flower centers. Up close it looks okay but from a distance... 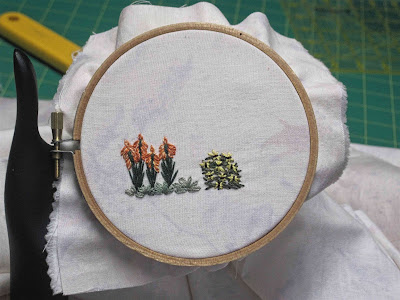 It's all so tiny! I'm striving to reserve judgement. I know the pitfalls of judging a work too soon. That path leads to UFO's. I'm thinking I might try to install a bird bath between and behind the two clumps of flowers but I'll have to screw up  my courage before I attempt that. Or maybe I'll try to put a tree in the background... or maybe this will sit and simmer while I work on something else altogether - but just until I decide what to do next, not to become a UFO!

There's yet another give away going on over in Nancy's shop. Pop over and leave a comment for a chance to win. :- )