I always find it helpful to have a purpose for the sewing or creating I do. Some days it's enough just to cut up scraps or current favorite prints and make blocks for future use, but a specific purpose for those blocks is always more motivating. What's really exciting is when I can take the blocks I've made randomly and combine them into a quilt top to fulfill a need. I was fortunate to have such an occasion arise recently.

James, my quilter son, is also involved in local theatrical productions. He makes costumes and props, he acts, he helps out in whatever way he can. He was approached recently with a request for a quilt-in-progress that could be used as a prop for a play he is not otherwise involved in. He was willing to have a go at piecing one but knew I could probably furnish the cast with what they wanted much more quickly. As we understood it, they wanted a flimsy, a row of blocks ready to be added to the top, and maybe some loose blocks. They came to the right people!

To begin, I dug out my box of 12" orphan blocks. I found enough Ohio Stars to get the ball rolling. Then it dawned on me that I could frame up some of the 8" sawtooth stars I've been making out of scraps. A simple two inch frame turns them into 12" blocks (all finished sizes), thus making them easy to use as alternate blocks between the Ohio Stars. 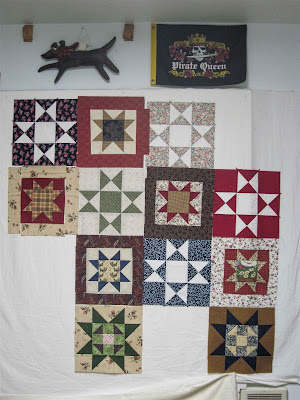 We were told they wanted something about 36" x 48" for the prospective quilt top. 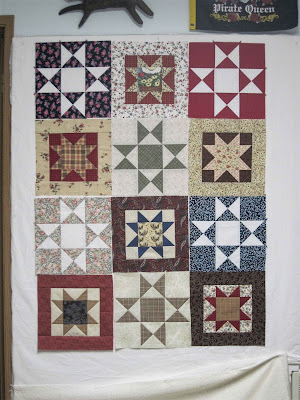 That's only twelve, 12" blocks! But then there was the separate row of blocks they requested, and maybe loose blocks as well. 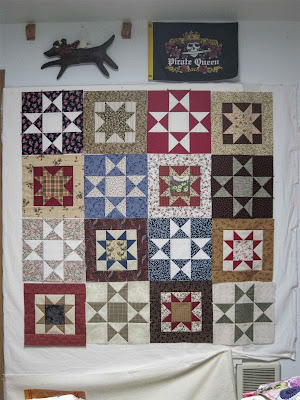 And when the pieces come back from the play - hopefully not in too bad shape - I can complete the top for a donation quilt. So I kept framing up sawtooth stars and made a few more Ohio stars to boot. 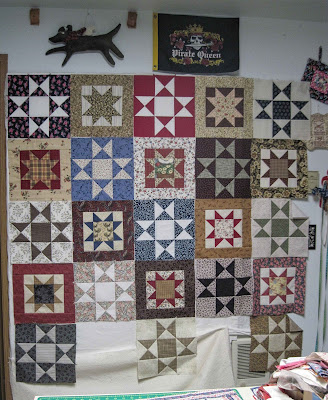 They should have what they need for the play now, and somewhere down the line someone will be getting a scrappy new quilt. No new fabric was used in the creation of these blocks so I'm calling this my Scrap Happy effort for the month of November. 😊 Kate has a list of other quilter/bloggers who are using their scraps to make all sorts of fun things. Hop on over to see what everyone else has been up to!
Posted by Magpie Sue at 8:00 AM