I have two finishes to share this time around! I've actually been doing quite a bit of needlework since the last Stitch Along post. I completed the little fox coin/card case and bestowed in on my daughter (who loves purple by the way). 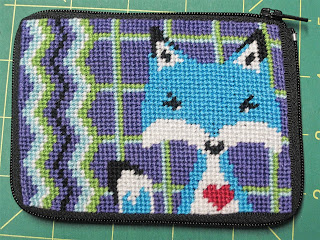 Once all the gray canvas was covered the purple didn't look quite so overwhelming. I keep having to learn that lesson over and over again: don't judge a project's success until it's complete. They always go through an awkward or ugly stage in the middle of the process!

I also finished up the Cocker puppies on the dish towel. 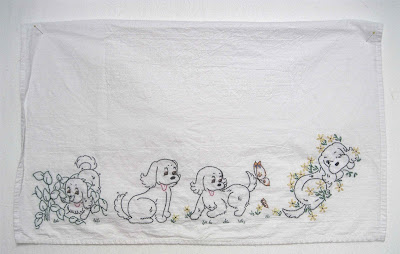 That guy off in the corner was the first image I transferred. I didn't know at the time that I would want to include the rest of the litter on the towel. I think I did a pretty good job of tying them all together by carrying the little flowers and spikes of grass all across the width of the towel, if I do say so myself! 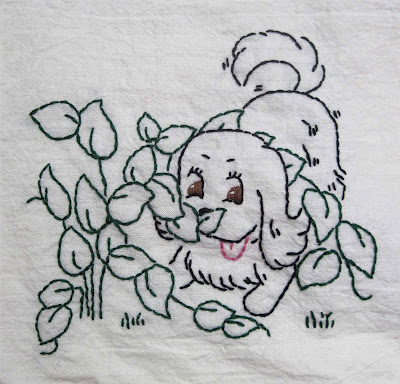 I don't think this little fella was completely stitched the last time you saw him. 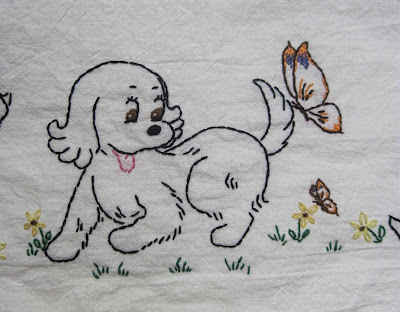 This one was barely begun. The butterflies were images that didn't come out as dark and were therefore hard for me to see. We've had some lovely sunny days off late, which made it easier to see what was meant to be stitched. I did take some liberties with the decoration of the butterflies however. 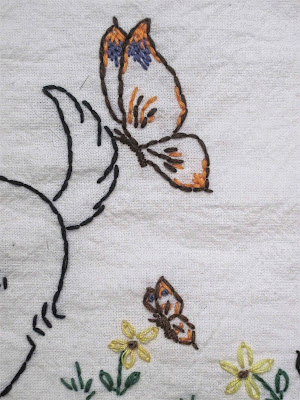 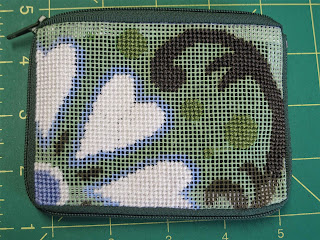 And if you are a regular reader you'll know I've been inspired to begin some sampler pieces in an effort to polish up my embroidery skills.  And, frankly, to give me a place to doodle with color and thread. There's been no further progress on the Virgin of Guadalupe since I last showed her... 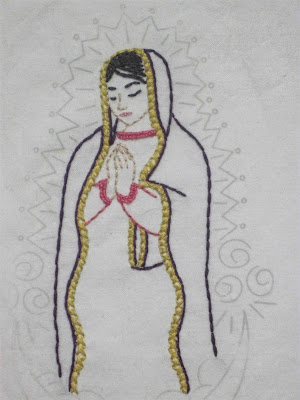 But I've been playing with stitches I'm less familiar with and using some of the floss leftover from all the needlepoint case kits I've done. 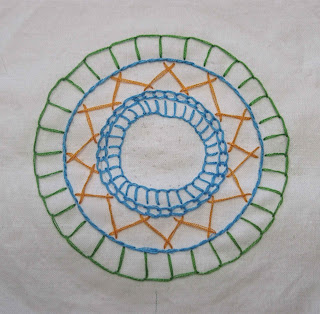 I drew a few concentric circles, tracing around various cups and jar lids, to give me somewhere to lay my first stitches. Obviously not all of my stitches were directed by drawn lines! I believe this is my first-ever attempt at herringbone stitches (in orange). I tried another new stitch inside the turquoise circle but couldn't live with the results. Those are the needle holes you can probably see marring the surface of the muslin. I'll do my best to smooth them out before I try stitching in that area again.

Most of the other participants in this Stitch Along have specific projects they're working on for this Stitch Along. There's some awesome work being done; I encourage you to have a look by clicking on their names below. We'll have another check-in on 25 June.