The Rainbow Scrap Challenge color of the month is anything in the aqua to teal range. I don't have a lot of scraps left in those colors after making blocks for Kate's quilts to raise money for ovarian cancer research and treatment in Australia. I have managed to produce these however: 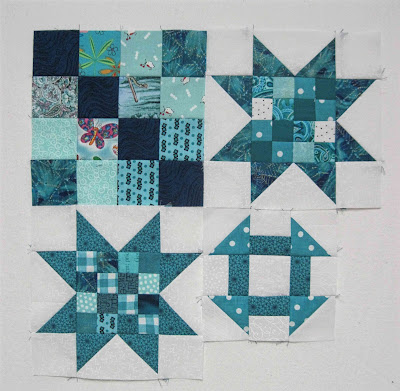 There might be a couple more small blocks before the month is over but unless I break into yardage this is pretty much it. On the other hand, I'm beginning to put some of the blocks in my Parts Department (where my orphan blocks go to live until they're needed) to good use. I had two of these Arrowhead blocks featuring chicken prints. 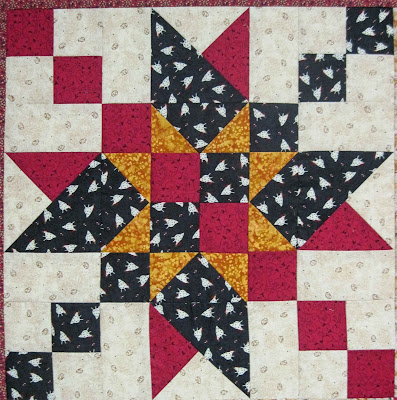 They finish at 16" each. There are a handful of other blocks featuring chickens too but they didn't play well with the Arrowheads. Which is probably why the original project stalled in the first place! 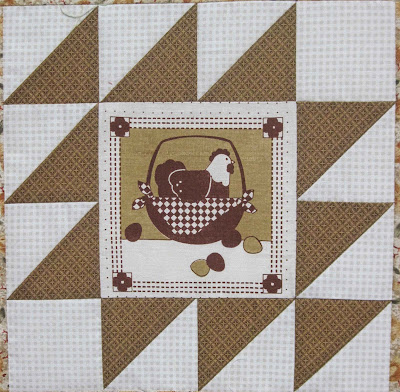 This is a 10" block. I figured if I made another 10" block I could set them in a four patch arrangement with the Arrowheads. 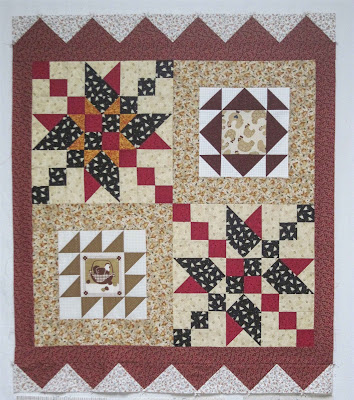 I framed the smaller blocks with another chicken print and then used the rusty print to make the composition 36" square, an easier number to build upon.

At this point I had to decide how I wanted to make this big enough for a twin bed. I did a little blog surfing and came across the Ad Hoc Improv Quilters Chinese Coins invitational. While I'm not officially participating in that effort it did give me ideas for this project. I've decided to make another strippy quilt, this time featuring a wide central column and two narrower side columns. The first step was to lengthen this square medallion. I did that with 3x6" flying geese units. Now it's 36" wide and 42" tall. In a few days I'll show you what I've done since then. Today I'm linking up with the RSC quilters so you can pop over there to see what everyone else is doing with their aqua and teal scraps. :- )
Posted by Magpie Sue at 11:45 AM