Last week was one of those I think of as "lost." Our internet connection was restored and has been strong since then. Unfortunately, my body took over and kept me from functioning properly. We will be having visitors this week so I may be incapacitated again for a couple of days. Before that happens I wanted to show you the progress I have managed to make.

Remember how I started making double four patch blocks and then discovered how much I liked the postage stamp stars I've been making for the Rainbow Scrap Challenge with them?

I made more of the double four patch blocks, one or two at a time, until I had enough for a small quilt. Then it was time to audition the stars. 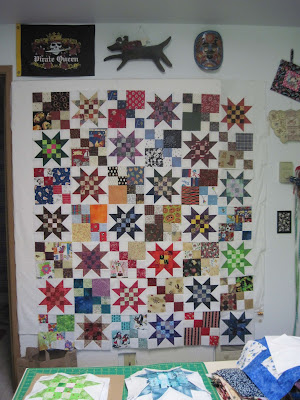 I filled in all the gaps and then spent a couple of days tweaking placements. I think this will be the final arrangement: 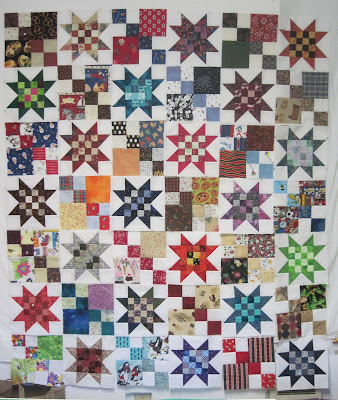 That orange star sort of grabs the eye but I haven't found anything I like better in that spot.These are all 8" blocks. Right now I'm not planning a border of any kind. This isn't the time for a big, involved project. Hopefully my internal systems will stabilize in the near future so I can turn my attention to my liberated medallion and a couple of new quilts for family members. I'd also like to get around to see what everyone else has been up to. It may be the end of the week before that happens however. I hope you're all having more fun than I have been!