My F2F swap blocks are now a flimsy! 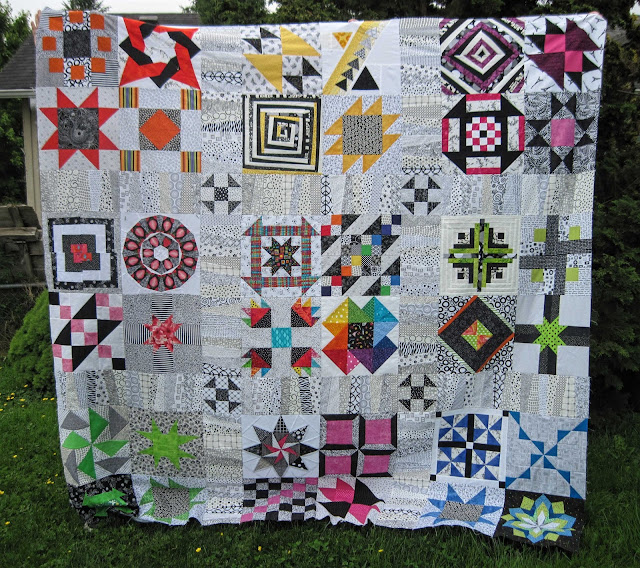 This should finish as an 84" square quilt. Setting the blocks was a pretty straightforward process once I had the sashing strips built and distributed as evenly as I could manage. The bigger challenge has been building a back for this beast. It needed to be a minimum of 90" square. The easy way out would have been to purchase extra wide fabric specifically made to be quilt backs. I have too much yardage in The Nest at the moment to get away with that however. ;- )

In spite of the fact that I have a lot of yardage, not much of that is extensive yardage of any given print. So no matter what I had to piece things together to get that 90" square. Since these blocks were made by new friends from around the world I decided begin with prints that have been given to me by other friends over the last few years.

There wasn't enough of any one thing to get all the way across the quilt back so two sections feature two prints each. 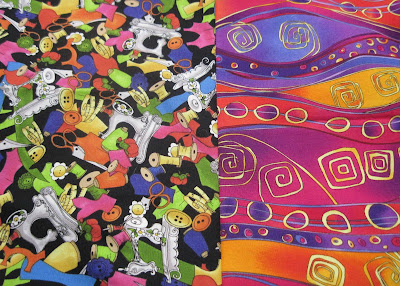 Then I needed a narrower strip to get the necessary length. That strip ended up being composed of three different prints but I only have two in a photo to show you. 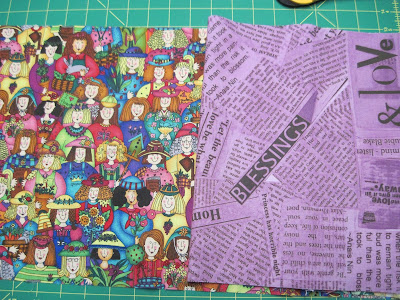 Technically all those women on the left are gardeners but they've been waiting patiently in my stash to be included in a project for many, many years. I figure they are a pretty good representation of the variety of ladies who made blocks in the F2F swap. The purple text print is one my sister just sent to me in that heavy box for my upcoming birthday.

It makes me happy to have the back of my quilt be as meaningful as the front. What makes me happier is that it turned out bigger than it really needed to be and is done. I declare, it's been a bigger challenge to build this back than it was to create the top! I will be avoiding projects of this size in the immediate future.

On a more technical note, I've downloaded and tried a couple of the photo editing programs y'all recommended. At the moment I'm using Pixlr. I like it pretty well. I think it's time to come up with a better system for managing the photo files while I'm at it. They've gotten a bit out of hand from my never having learned exactly how best to handle files and folders in a computer.