I had fun this week pulling out tiny blue scraps and strips to make 8" postage stamp stars for my 2016 Rainbow Scrap Challenge. The first star of the year: 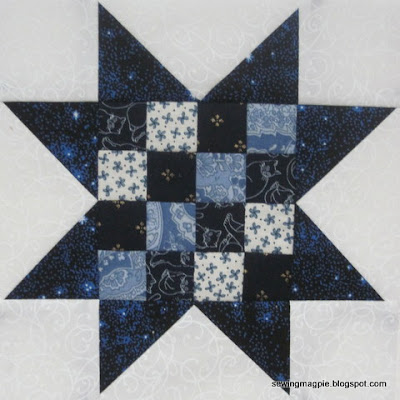 I've also been working on a baby quilt. I didn't learn about the blessed event until mid-December and the baby shower is next weekend. (I believe the baby is actually due early in February.) In the Parts Department I found a handful of 12" blocks that had been made out of appropriate prints. There were only two 6" blocks that would work. That was enough to get the ball rolling at least. I made a couple more 12" blocks out of prints that played well with the existing blocks and then cut patches for more 6" blocks. I had to go shopping (horrors!) to find something to use in the alternate spaces. A new paintbox print in my local quilt shop was the closest match to the colors and scale of the other background prints. 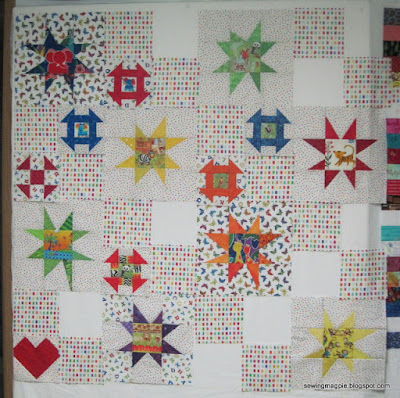 The top was completed this week. Found some flannel in the closet to use for the back and James is quilting it with swirls and butterflies in the alternate blocks. (There are butterflies in the backgrounds of two of the 12" blocks.) 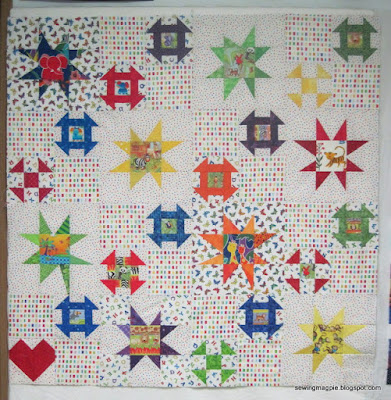 While he's doing that I've made a few more blue stars. The 6" Hole in the Barn Door blocks were assembled as leaders and enders over the course of the last week or so. 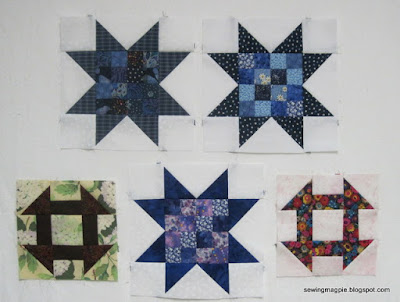 There's going to be a ton of binding in my future. After the baby quilt is bound and gone I'll have the twin's quilts to bind. No doubt I'll be taking breaks to make more stars!

I'm linking up with the other RSC bloggers over at SoScrappy today. :- )