Last month, when I saw that Kate (at talltalesfrromchiconia) and Gun (from Rutigt) were making a push to use up their scraps, I decided it would be a good opportunity for me to spend at least one day a month nibbling away at the collection of fabric crumbs that are the result of my block-making efforts. I work with what I consider to be scraps most of the time. Scraps are my favorite medium if you will. But those tiny or odd shaped pieces that won't be part of a traditional block need to be dealt with somehow. (Throw them away? Perish the thought!)

At various times I've sorted my crumbs by color into separate containers or dumped them all together in one large basket. Eventually I got to the point where I was putting the odd shaped pieces in one place and keeping the strings or narrow strips separate. Every once in a while I donate some strings to my friend Christina who loves to make string blocks and quilts. But the crumbs keep adding up.

I've tried "made fabric" and crazy piecing and liberated log cabin blocks at various times in my quilt making career. I enjoy crazy piecing for a specific purpose but have found that "making fabric" isn't really my cup of tea. So most of my odd bits end up in what amount to liberated log cabin blocks. Those 6" or 8" blocks go into my Parts Dept. until I have a use for them. Sometimes the crumbs only become patches, 3.5" or 4.5" square, that I will then use in a traditional block. Which I guess is really just "made fabric" after all!

I decided to sew crumbs together between seams (a la Bonnie Hunter's leaders and enders) for a few days instead of assembling units for 6" Shoo-fly or Hole in the Barn Door blocks like I normally do. This is the result: 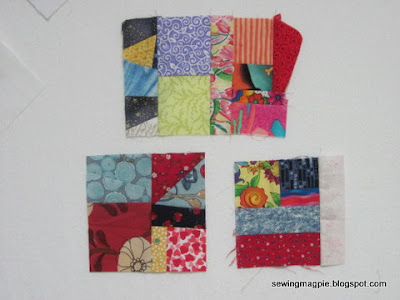 I have one 4.5" patch, another that lacks a string on either side to become a 4.5" patch, and a piece that might become an 8" block eventually. I guess the challenge for August is to complete that potential 4.5" patch and bring the larger piece up to a usable size. For now it's enough that at least these few crumbs have a more secure home than they had previously. ;- )