I had a blast pulling images out of my stash to create the reverse side for the Treasure Island panel. It all began with three 12 inch squares of a companion treasure map print and the tall ships I'd pieced. In order to get the ball rolling I decided to show some of the creatures of the deep that might be swimming under the ships. 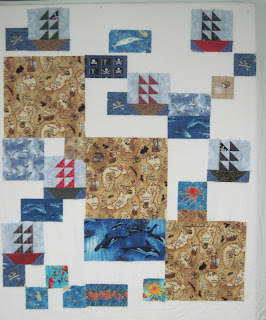 The whales swimming under the center map square is a 12" x 6" piece that was literally all I had left of the original yardage. I confess to stopping in a local quilt shop to supplement my palette of sea creatures. I'm happy to report that my reaction to that expedition was far less severe than it could have been. :- )

Prints that implied water and sky were used to transition from one image to another. 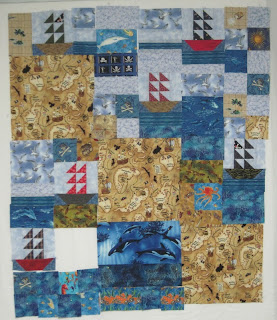 Almost the most difficult thing was to figure out what to use to bring this side up to the same length as the pre-printed panel. In the end a simple strip of one of the water fabrics was a perfect solution! 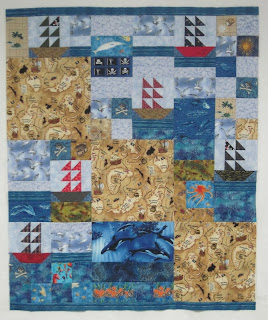 Here are a couple of detail shots for you: 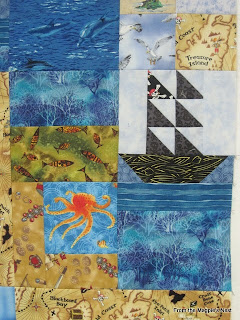 If you could see this bit in person you'd see that the giant octopus is guarding coins and jewelry on the seabed. This guy was as close to a sea monster as I could come up with. The other one I'd fussy cut was just too small. 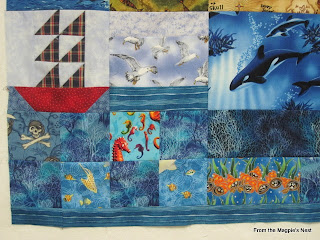 In the photo above we have seagulls swooping over the water and more of the undersea creatures. I had one print that looked a lot like coral or sea fans but many of the "seaweed" patches were actually cut from what was a tree print.

I'm very happy with the way this turned out. There's a lot for a little child to discover and explore. The challenge now is to get it quilted! There's already so much going on that I think simple straight line quilting will be sufficient. I just have to gird my loins and get started! ;- )