The Americana lap quilt has been quilted and pruned. I had to go out to buy fabric for the binding; that still needs to be turned into binding. In the meantime I've set the koi pool UFO aside (bottom of previous post) to whip up a baby quilt. Or so I hope, since the baby is due next month!

It all began with this Treasure Island panel I received as a gift from my sister-in-law. 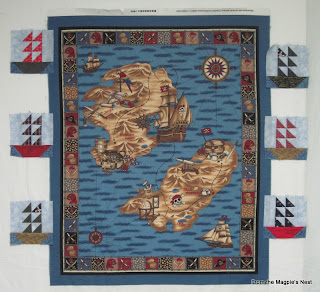 Apparently that was five years ago! The mother-to-be found me and reminded me of the panel when she reached out after missing an opportunity to buy a quilted version of the panel on Etsy. We've been exchanging email since then. What you see above is one of the options I suggested to her. 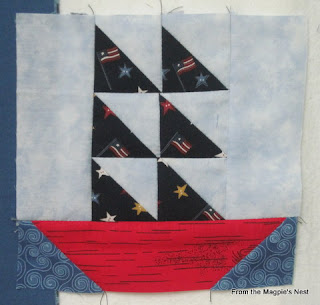 Two of them are flying the Jolly Roger... 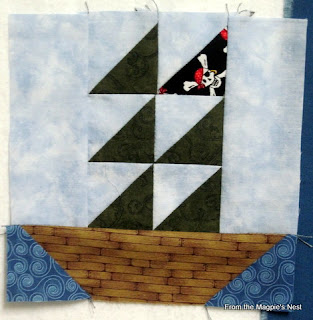 We eventually decided that I would use the ships to create the reverse side for the panel. This is the potential arrangement I currently have on the wall: 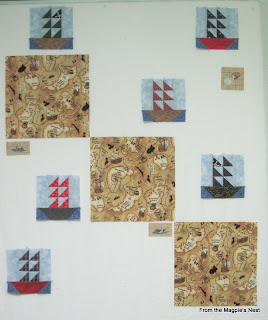 I've fussy cut a companion map print into 12.5" squares and a few other much smaller pieces from an old, old print. 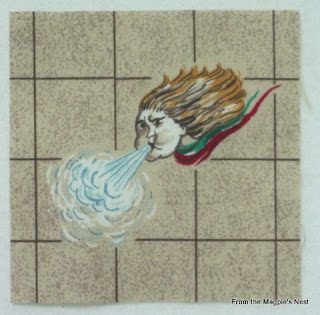 I'd like to have a larger sea serpent but the little guy in the picture below is the only one I could find in my stash. 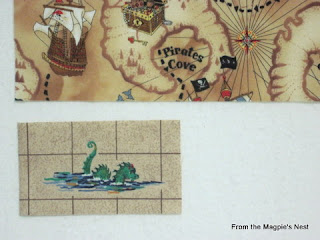 This is going to be fun to create. Keep your fingers crossed that my energy holds out!

One thing I realized after piecing the ship blocks is that block piecing is what works for me for instant gratification. Completing a block gives me more satisfaction than merely running fabric through the sewing machine. Which could be why it didn't occur to me to treat the koi pool UFO as a log cabin block and simply frame it up with strips. I want to make some blocks to go around it! I have an idea of the type of block I'd like to make too. The trick will be to find the right colors and/or prints to create the look I want. It will be interesting to see how closely the finished top comes to the vision of it I have in my head. :- )