I have sewn the next ring of Shoo Fly blocks around the central panel: 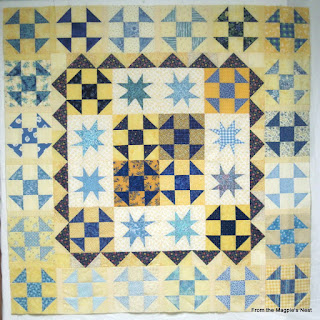 I'm purposely using as many values of yellows as I can because of the variety of values in the collection of blocks that started this project. In the corners where the flying geese border comes together I ended up with three light patches and one medium value patch. Those light patches really stood out, and not in a good way. I think I knew I would have to replace them but I avoided the task as long as I could. 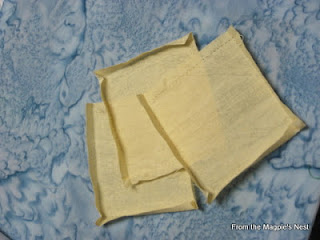 In the end it was worth the effort even though it was a bit tedious to do. 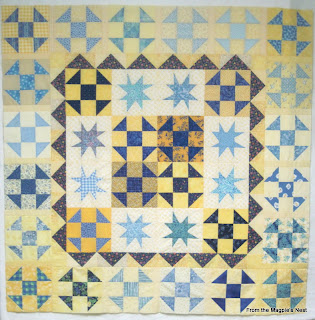 At this point the top would finish at about 50 inches square but I'm shooting for a quilt that will fit on a double bed. The question is, what to do next?

Frame up the remaining 7.5" Shoo Fly blocks to make them ten inches each?

In the end I decided to make a bunch of five inch Hourglass blocks, thinking they would make a good transition from one round of Shoo Fly blocks to another. 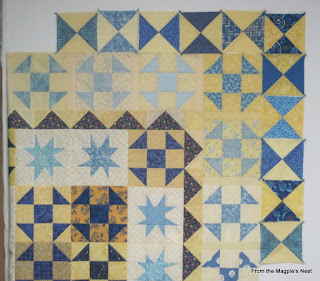 Not so much. It's too busy. The blue triangles in the Hourglass blocks overwhelm the Shoo Fly blocks.

What happens if I turn every other block? 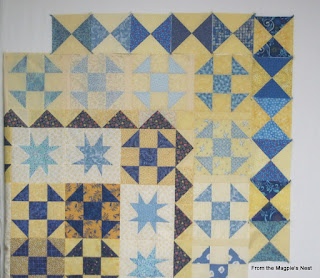 Not much better. Guess I need to reconsider my options...

Meanwhile, I can't believe we're halfway through November already. And Thanksgiving - for us Yanks - is next Thursday! Does that seem early to anyone else? ;- )