Toward the end of my last post I made a comment to the effect that I wanted to visually separate the four blocks in what will be the center of this quilt. At the time I had four blocks that, in the photograph, appeared to have the same or very similar backgrounds. (Scroll down to the bottom of my last post and you'll see what I mean.) Taking my own comment to heart I changed out two of the blocks to create even more distinction between the Shoo Fly blocks. 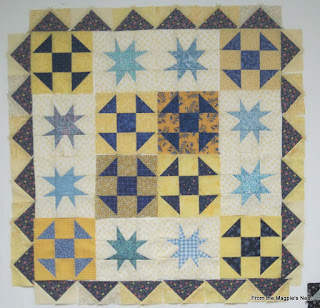 Then it became a question of what to do with the rest of the blocks in this particular collection... A solid ring of Shoo Fly blocks perhaps? But then I'd lose the pattern of the individual blocks again... 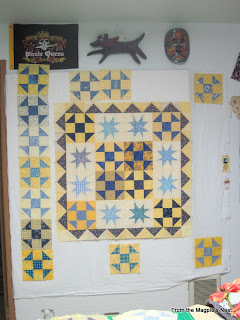 Maybe grouping darker ones in the corners? 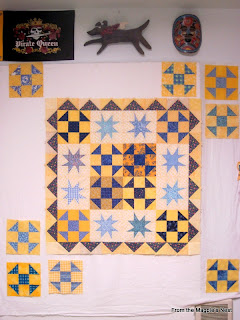 I found myself making the math harder than it needed to be in my attempt to distribute the blocks around the central bit. Turns out a simple one inch sash between the blocks was all that was required. 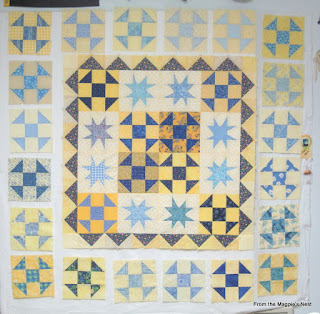 I did keep the darker background blocks in the corners and worked toward lighter blocks in the middle of each side. Since this picture was taken I've assembled these blocks into a top about 50 inches square. I'll show you that the next time, and maybe by then I'll know what my next step with this project will be!