These are the blocks I made between finishing the Who Let the Dogs Out?! flimsy and cutting the fabrics for my text quilt. 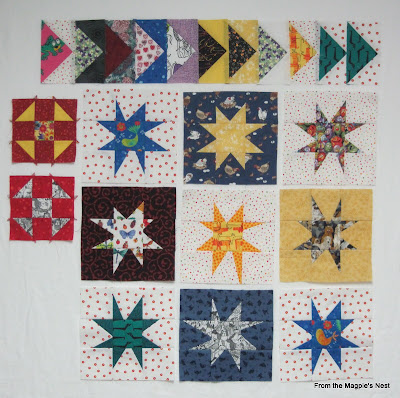 I have the string blocks pieced now and needed to clear the wall so I could put them up. I got out the baggies I use to keep my parts blocks sorted. Most of them are simply sorted by size. All these nine inch liberated stars, for example, went into the bag with the nine inch Shoo Fly blocks I'd pieced some time ago. But I have so many six inch blocks now that I've got three separate bags for them. One has only liberated log cabins, one has only Shoo Fly blocks, and the third holds everything else. I was shocked to see how may Shoo Fly blocks had accumulated: 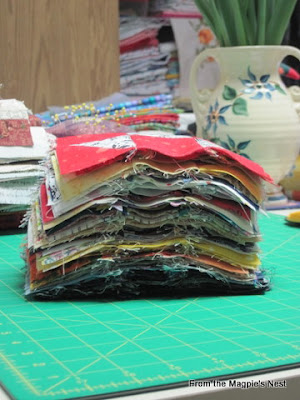 That's a stack of 70 blocks! Obviously it will be time to make a new puzzle quilt one day soon. :- )

The next surprise wasn't quite as pleasant. It wasn't horrible either though. Phoebe has an early warning system built in that lets me know wa-a-a-y ahead of time when the bobbin is running low. If only she also had a system to let me know when the actual spool of thread is about empty! 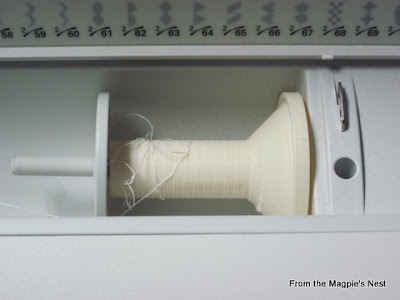 The only reason I caught this before it became a problem was because the bobbin did indeed run out and I had to wind a new one. Good timing eh? 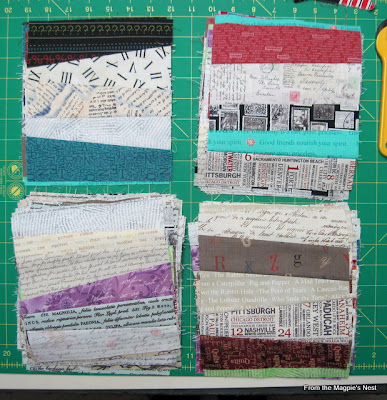 There's been a real debate raging in my head over the eventual layout of this quilt. You'll get to see at least some of the options I'm considering in my next post. :- )
Posted by Magpie Sue at 8:06 PM