As I mentioned in my last post, I've been happily sewing up scrappy blocks lately. 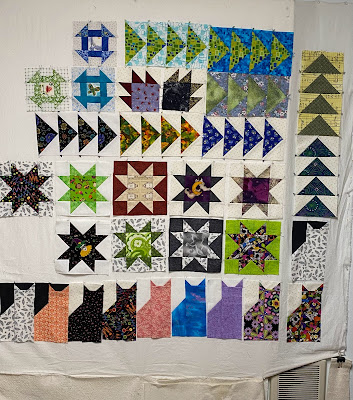 Friday I got up to press seams and when I returned to my sewing machine the screen was black. It didn't respond when I toggled the on/off switch. I unplugged it and plugged it back in. Still nothing. I'd recently replaced the power strip I have it plugged into so I was confident power was flowing. All the room lights were on after all, and the iron seemed to be functioning just fine. Nearly in a panic I called my trusted sewing machine service man, Bill. It was close to closing time for him so there was no point in trying to take the machine in to him but he did spend time with me on the phone, offering what advice and counsel he could. It appeared I would need to replace my beloved Phoebe (Pfaff tiptronic 2040). Many tears were shed.

Bill told me about the machines he carries, the Janome line. I've heard good things about them over the years. Given his four decades of servicing sewing machines I place a lot of confidence in his opinions. I'm not in a position to go to other vendors to try out other brands either. He recommended a model he had in stock and we made the commitment to purchase. I packed up my little Phoeobe and mourned her passing.

I haven't unpacked the new sewing machine yet. My sweet husband took time out from his busy schedule to go pick it up for me but I just couldn't face learning a new machine at that point. Is anyone else unnaturally attached to their sewing machine like I am?!

When I had finally calmed down somewhat I was impressed to check the power strip Phoebe had been plugged into. Because it's new to me I am less familiar with its' layout and operation. It's also black and gray, which has become harder for me to see unless I'm right on top of it. (The previous strip was white and had fewer outlets available.) I thought it odd that there was no little indicator light glowing. Sure enough, the power strip had been turned off. The on/off switch on that model is on an end. Apparently I'd kicked it, turning it off, in passing from the ironing board back to my sewing chair. When I turned it back on and plugged Phoebe back in she worked just fine, and has since. I can't describe the relief! Euphoria might do it. 😁

I've been using Phoebe for some 20 years. The question now is, do I keep the new Janome against the time Phoebe finally does kick the bucket or shall I return it? I do have my other Pfaff, Ruby Blue. She's a newer machine but I have never been as comfortable using her as with Phoebe. It may be time to send her on to a new home and hang onto the Janome...