It's been three weeks since out last check-in with the Stitch Along group. Knowing this check-in was coming up motivated me to consider my current embroidery and needlepoint projects. Which one to work on? The decision was almost made for me when I was in Hobby Lobby last week. I don't go in very often so when I do I try to make the most of it. This time I went in for a couple of things for Christmas for the grands but cruised the fabric and needlework aisles while I was there. (Frankly, I cruised the whole store but the toxic fumes took their toll after I'd made the most important selections.) In the back of my mind I knew I needed a flesh tone for the Jenny Hart panel I've been working on. Almost without thinking I picked up a skein of DMC floss as I drifted past. It turned out to be a perfect choice. :- )

Here's where I left the panel: 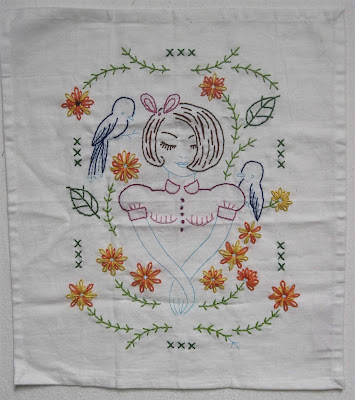 It didn't take long to outline the arms and face. After that it seemed silly not to just go ahead and complete the picture! 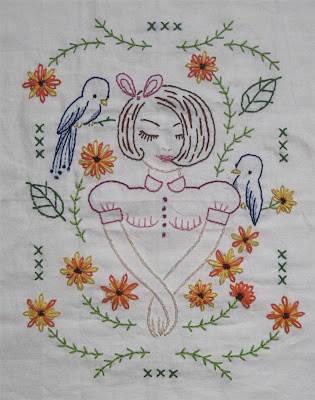 I did little satin stitched eyes on the birds. I thought they would be French knots originally. The flowers all have French knot centers. I added the bit of shading on the bird's breasts.

Here's the panel after laundering: 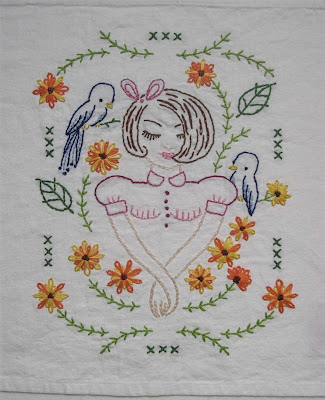 I don't know whether you can detect much difference in the photos but it made a difference in real life. I've had several ideas about how to mount this or add patchwork around it. The thing is, it's already hemmed, with tiny stitches that would be a bear to try to take out. The hem is significantly thicker than the rest of the panel. I may just give it to my daughter to pin to a wall in one of the grands bedroom. It's the lazy way out, I know. Still, better to have it pinned to a wall than languishing while I dither about what else to do. ;- )

To see what the others in the group have been working on click on their names below. We are welcoming Steph this time around. If you'd like to join in contact Avis. Maybe the next time we check in, in another three weeks, I'll have returned to my crown needlepoint case. Or maybe not!