I've slowly been making progress on my Tea Towel Challenge quilt, which will double as an anniversary quilt celebrating our 30th wedding anniversary. The first step was to cut off the calendar portion of the towel. If it had been from the year of our marriage I would have left it in place - or tried to anyway! 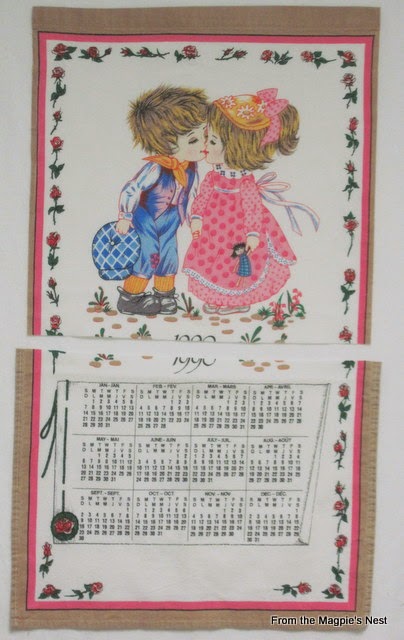 I was able to cut off the side hems but took out the top hem before trimming that edge to make it easier to get a straight cut.

The design I'd come up with for the rest of the quilt involved making some heart blocks. My first thought was to make a heart for each of our children. We have three, but not really one for each year of our marriage. More like all three in the first ten years! Which led me to consider where we were in each decade. The first ten years were spent in Texas... 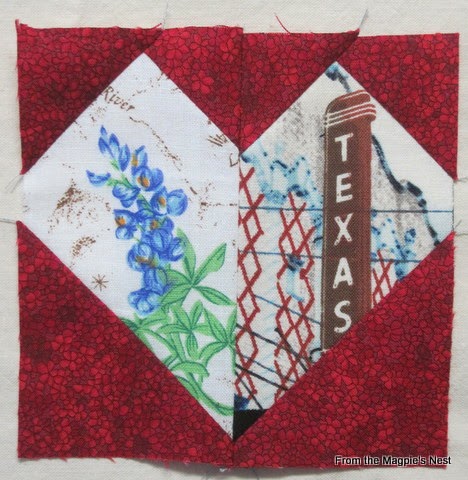 I had to use two different prints to make this four inch heart.

In the next decade we moved up to the state of Washington, specifically the Skagit Valley. Unfortunately, this photograph is rather blurry. What it features in a small image of tulips and the words 'Skagit Valley' on the right half and 'Washington' on the left. These were cut from a print made for the Western Washington Shop Hop a few years ago. So glad I still had some! 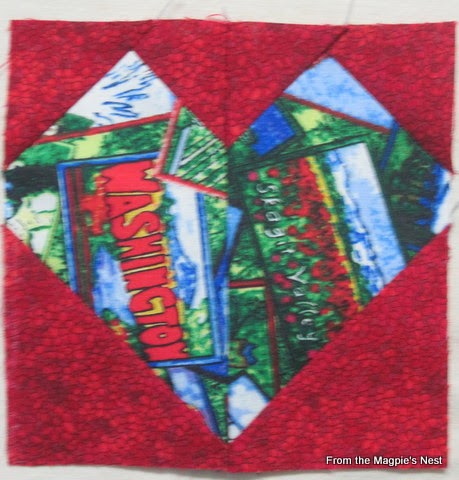 We're still in the Skagit Valley so I was a little stumped as to what to do for the third decade. DH has been working in Seattle for about that amount of time (a 60 mile commute each way - yuck). In the same Shop Hop print I found an image of the Space Needle, not too far from DH's current office, and a mountain that could be Mt. Baker. It might have been meant to represent Mt. Rainier but I think it can work for either. DH loves Mt. Baker and gets to see it most every day on his way home. So there's the third heart! 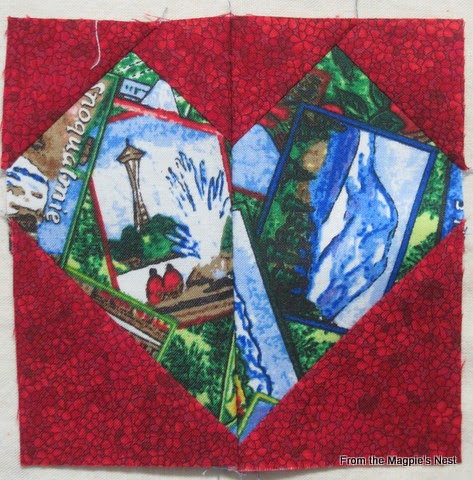 I originally wanted to include this beautiful monogram from another towel in my quilt: 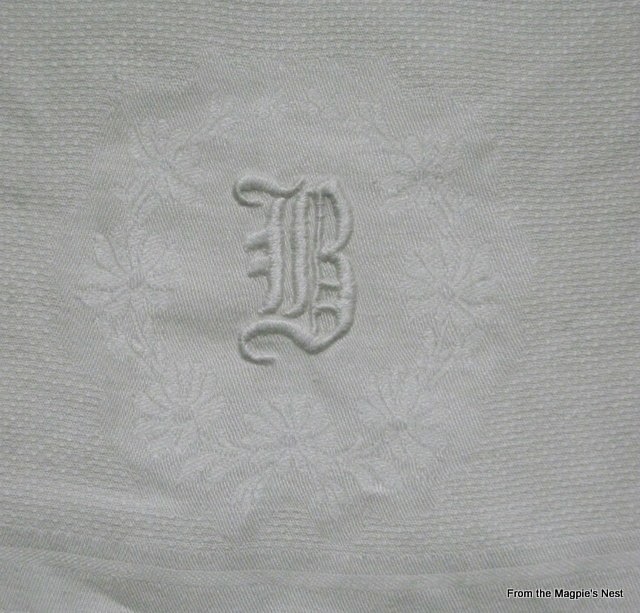 This was going to be the layout: 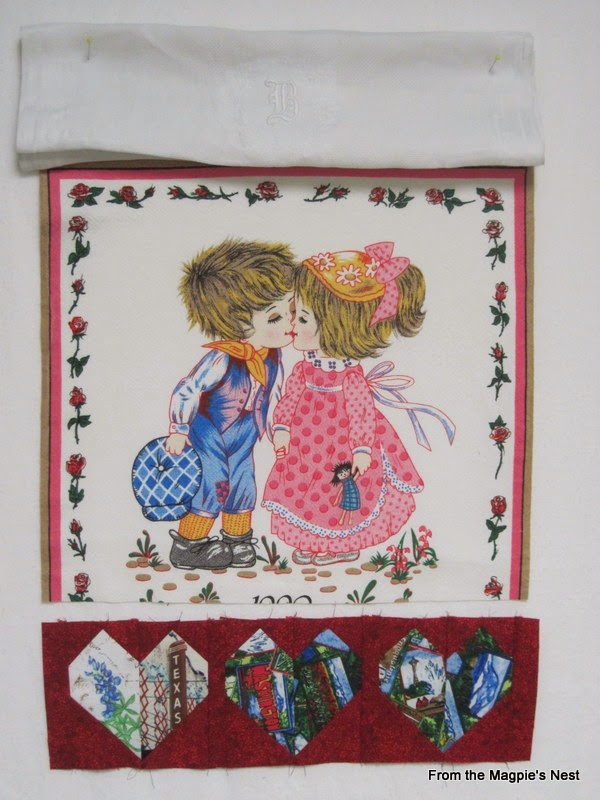 But it didn't look as good as I'd hoped it would. Nor could I figure out how to make it work. That's when I went back to my first idea and made a heart to represent each of our children. 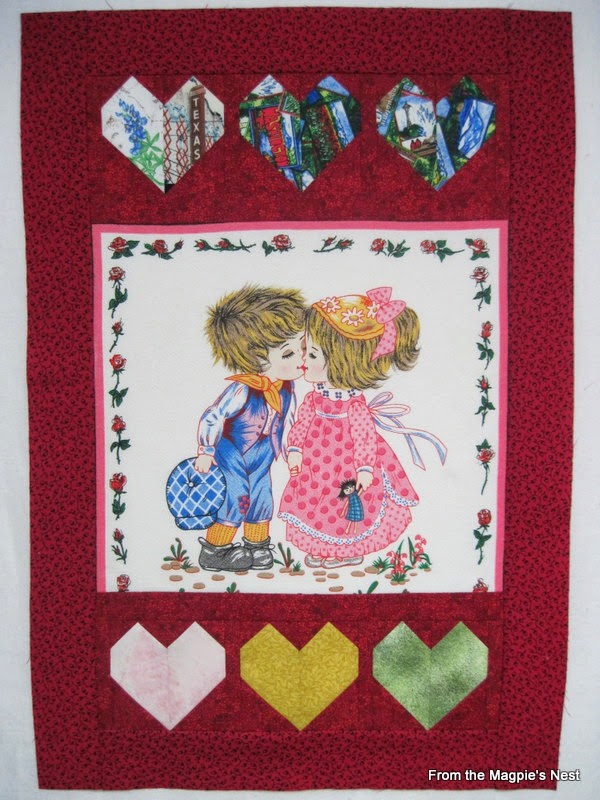 I used the color of their birthstones to make my fabric selections. I'm still trying to figure out whether or how to embellish them. What I've done so far is to bead/quilt the background around the couple. 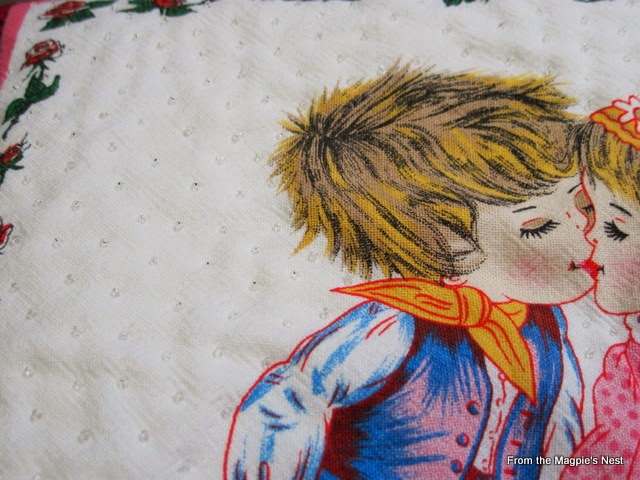 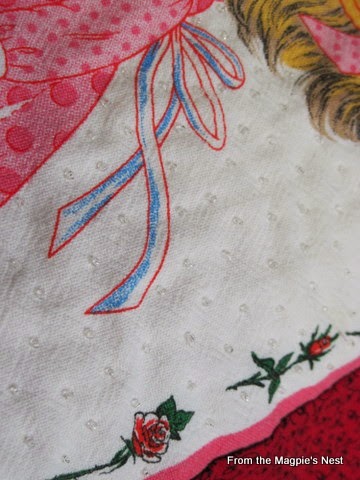 Before I started beading I put a layer of muslin on the back so I have a regular quilt sandwich of the top, Warm & Natural batting, and muslin. I'm using a double strand of Silamide thread. Here's a picture of the back of the quilt: 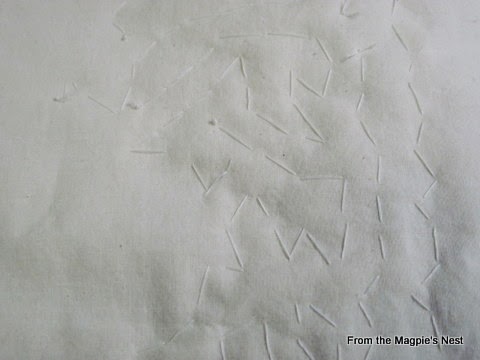 When all the bead work is done I will put a false back - something prettier - over the muslin and tack it in place discreetly before I bind the edges. The second layer of fabric will protect the beading thread and allows me to work more quickly and freely in this stage of the process. Now I just have to figure out what to use in and around the heart blocks... :- )
Posted by Magpie Sue at 2:15 PM