A Red and White and Pink Christmas

I hope everyone had a happy Christmas. We certainly did. :- ) 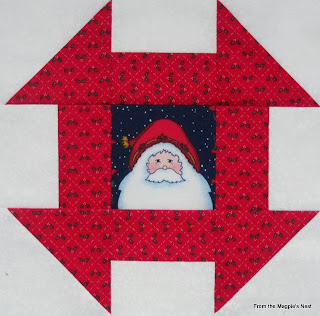 Our son who lives out of state brought his girlfriend with him for his annual visit this year. That was a treat. She fits in well with our crew. On Christmas Eve our daughter, her husband, and all the grandgirls were here for a gift exchange and games. I was so impressed with how well behaved the girls all were. There was no fighting over gifts, no tantrums, only a tiny spat between the twins which can be easily overlooked due to their age (not quite four, and they are twins after all! What one wants to play with the other naturally also wants to play with).

I had a very Skelly Christmas: 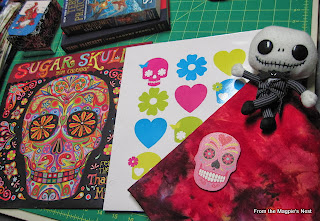 From left to right there's a calendar, a pocket folder, an emery board and a plush Jack Skellington on fabric that was hand dyed by my friend C~. There was also a tee shirt with fabulous Jack Skellington artwork on it but I didn't think to get a picture of it for you. I have new paperback novels to read and a sparkly cat pin now decorating my felt hat. I was also given cash, which I promptly went out and spent on fabric!

The Christmas flimsy hasn't progressed much since my last post. I had to make a couple more of the 9" Churn Dash blocks to create side borders.

These will be sashed before I add them to the central bit. Can't say that I have recovered my enthusiasm for this project yet though. Frankly I haven't had a lot of energy for sewing for several days. I hope that improves soon.

On another front, the red and white and black star quilt* I made a few months ago has been bound and laundered. Unfortunately one or more of the reds bled, in spite of the pre-washing and vinegar rinses all my fabric goes through. I put a Color Catcher in with the quilt too. These spots are probably the worst of it: 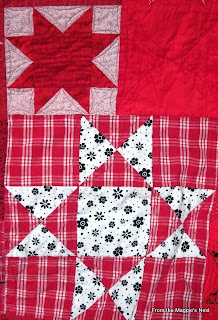 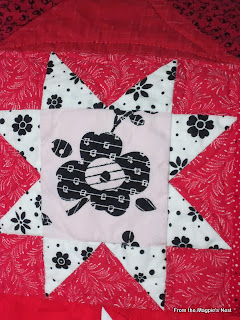 What fascinates me is how some of the white patches retained the pink color while others didn't. For example, the central patch in the star above is pink but the star points stayed white. There are other areas where a black and white print took a little pink so that it just looks less pristine than it did before. Even though this quilt is going to a male adult I'm going to send it as is and hope the pink doesn't look too odd to him. I will also include instructions to only wash this in cold water and hope for the best.

* It looks like this is the only post I made about this quilt! I'll have to be sure to get a full portrait of it before I pack it up for shipping. Sheesh! I've been a worse blogger than I realized this year!