I haven't laid out the chevron blocks yet. Nor have I made any progress on the challenge project for the La Conner Quilt Museum. I seem to be suffering from Attention Deficit Quilting Disorder...

I ripped this picture out of a Country Living magazine a couple of years ago because the quilt on the bed really appealed to me. 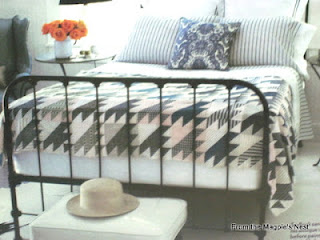 It's an antique quilt that the homeowner purchased somewhere back east so there was no maker's name and no quilt name given in the accompanying article. I drafted out the block and eventually discovered that it can be called Four Crowns or Sailboat. There may very well be other names for it as well.

I thought of this quilt after seeing a black and white quilt one of the members of my local quilt guild had with her at the meeting last week. The quilt in the photograph was made of indigo blues and shirting prints. I didn't want a reproduction quilt but I did like the high contrast between the dark blue and the white and ivories. I decided to try it in black and white prints. 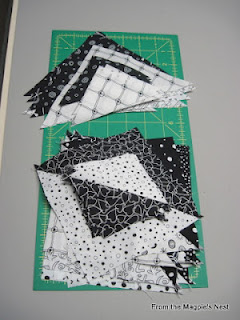 Or mostly black and white prints! ;- ) 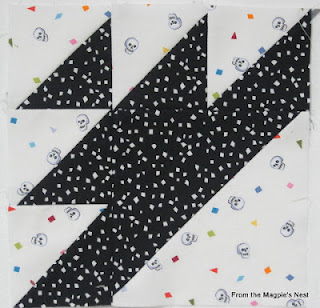 According to my 1,001 Patchwork Designs by Maggie Malone four blocks set this way is called Four Crowns. 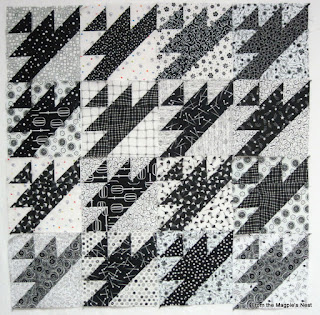 Four blocks set the way they are in the middle of this layout is called Sailboat. 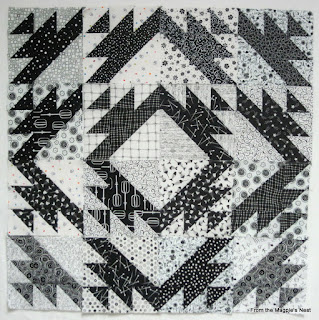 "Crowns" makes more sense to me. There's no telling what name my final quilt will end up with however!

My plan is to make enough blocks to end up with a roughly sixty inch quilt. These blocks finish at 8.25 inches. I think there's going to be a black and white checkerboard border (made from four patch blocks).

It's interesting to me that I need so much fairly mindless sewing these days. I used to enjoy the challenge of creating completely original work. Now I don't have the mental energy for that sort of thing. I'm content to cut the same shapes over and over, and to chain piece long strings of patches. Maybe this shows personal growth or maturity. All I know is that it feels weird. Based on past experience, this is abnormal behavior for me!
Posted by Magpie Sue at 11:12 AM