After I delivered my Medallion quilt to Heather for quilting I remembered another Churn Dash project I had started back in the day. It must have been the mid to late 1990's. I was playing with plaids and homespuns, and I think this was one of the first times I tried a diagonal set. 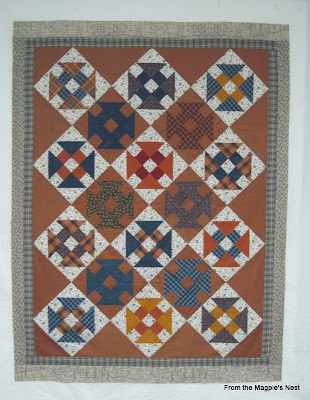 It was put away because once I had the setting triangles in place I didn't know what else to do. It was also a strange size, slightly under 33" x 42." I really liked it but it was too big to be a wall hanging (given the wall space we had at the time) and it felt too grown up for a baby quilt. Now, with more experience under my belt, it seemed natural to just put a couple of borders on it to bring it up to a workable size. In this case that was 36" x 48."

I thought of this UFO because I had some blocks and pieces leftover from my Medallion quilt and I was pretty sure they were basically all the same color scheme. I also dug into my orphan blocks to see what else I might have that would work. I found a few blocks that I think must have been leftover from when I originally put the diagonal set together. The first thing I did was to frame them up so they would finish at 12 inches. Then the 10" and 12" blocks went on the design wall with the UFO. 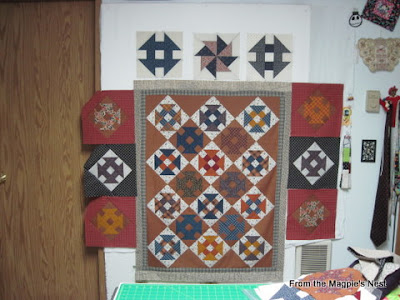 Next I took my leftover flying geese units and used them to make more blocks. I was able to make a couple of Dutchman's Puzzle blocks and a couple that are variations on that block (the geese are pointing in a different direction). I used some of the geese to frame up 5" Churn Dash blocks I had on hand so that they became 10" blocks. And I cut a few new patches to fill in the blank spots. Then I had to resort to using the bed to lay out the blocks because it had all outgrown my design wall. 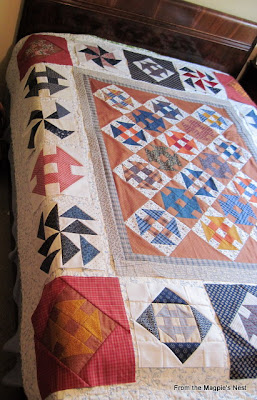 Oh yes, I made a star block with a Churn Dash center too. You'll see it in the picture below. That block didn't make it into the final version though because of its' dark background. I ended up making a lighter star block for that spot. 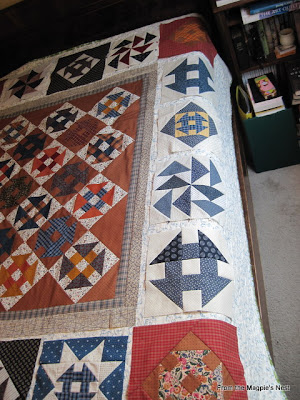 Fortunately I still had enough of the brown that I'd used in the diagonal set to sash the border blocks. Unfortunately, when I had the borders all sewn up they were one and a quarter inches longer than the center panel of the quilt. Arrgh! And I thought my math was so accurate! 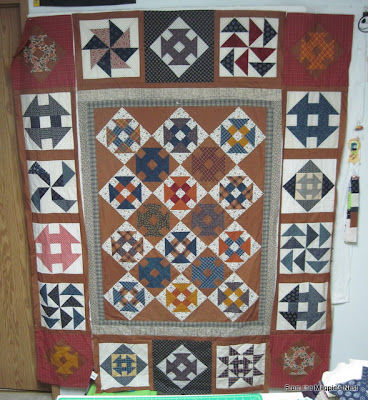 Finding a solution for that little problem required some sleep. The next day I took out four sashing strips and replaced them with slightly wider strips. 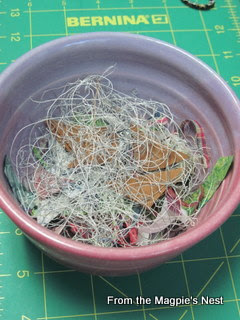 That seemed to do the trick. All it needed then was 3" at either end to get the length I wanted. This quilt will finish at 60" x 80." I don't have a picture of the finished flimsy - sorry. I'd found the perfect backing fabric in my stash and was getting ready to baste the layers together when I thought about it and by that time it was too dark to get a decent picture. And now it's all rolled up, pinned and waiting for me to figure out how I'm going to quilt it. It won't be anything fancy, believe me. My goal is to get this done and on its' way to New York ASAP. I kind of have a hankering to do some more piecing before I start the quilting process though... ;- )
Posted by Magpie Sue at 9:44 AM