I  made some additional progress on the new quilt top out of the Parts Department. Built a couple of 12" blocks out of 6" parts and then sashed the blocks with scrap strips to mimic the Chinese Coins columns I intend to put between and on either side of these three columns. 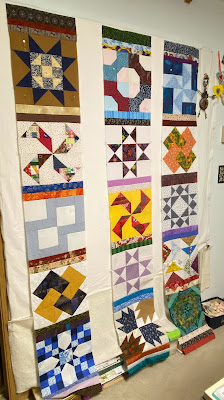 But now I seem to be suffering from a flare of carpal tunnel syndrome. I tried a bit of needlework... And had to quit due to the shooting pain up my forearm. This was meant to be my ATC for week 50 of the #52tagshannemade project. My hope of having a complete set of ATC's by the end of the year has evaporated. I am determined to fulfill the final prompts eventually, it just won't happen this year, darn it. There won't be much, if any, progress on quilts in the immediate future either. Both arms are acting up actually, the left less than my dominant right side, but enough to keep me from using either to the extent I normally would. {sigh} This is NOT FUN. 😒 I am feeling more like the Grinch this Christmas than Sally-Mae Who (or whatever her name is).

May your holidays be brighter than mine this year! ❤️