We've been having true summer heat lately. I used to tolerate it much better than I seem to do now. Plus we now have a neighbor who apparently likes to cook outdoors. That has made the air quality too poor for me to open the windows to relieve the heat in the house. We've had to run our portable air conditioner earlier and longer than in previous years. Husband is looking into more efficient ways to cool our home. It's also been a while since we've had any appreciable precipitation. But this morning we woke up to rain and cooler temperatures. Hurray! On top of that, I felt better physically today than I have in days. There'd be no better opportunity to put bindings on quilts so that's what I did today. 😁 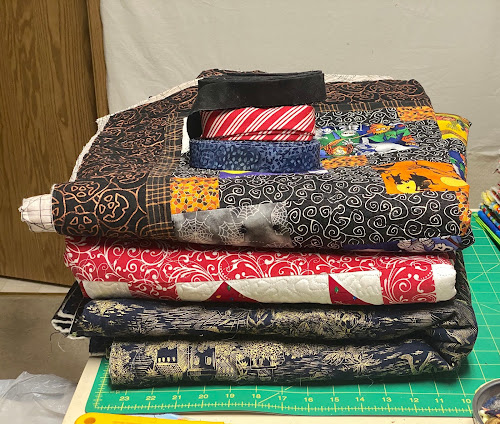 The red and white quilt in the middle of the stack did not get its' binding today but the other two did. Here's a detail shot of the quilting on the quilt at the bottom of the stack. 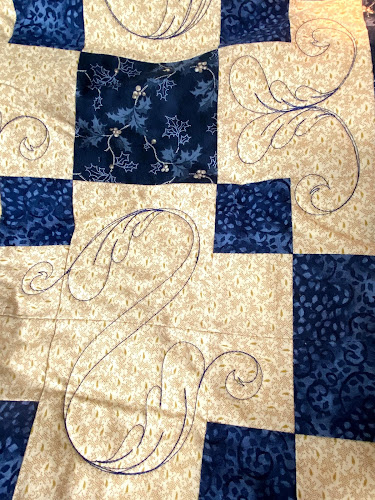 I tried to get a shot of the quilting on the Halloween quilt too but I'm afraid it's pretty hard to discern. That's a Disappearing 9 Patch quilt. I had James quilt the "sashing" so the novelty prints would stand out. It will be interesting to see how it looks after it's been laundered. 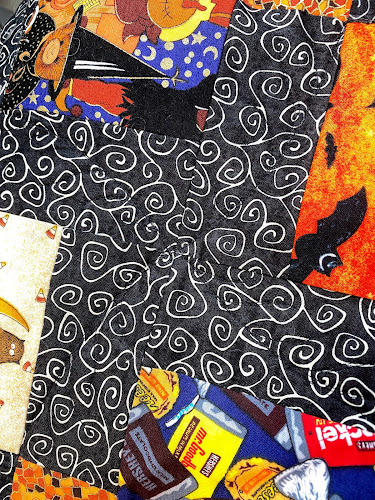 As you can see, I figured out how to get pictures to load again. Turns out all I needed to do was clear my computer's cache. Next up will be to figure out how to get the pictures where I want them in the blog post more easily. 😒
Posted by Magpie Sue at 8:08 PM