So as I was touring the Rainbow Scrap Challenge blogs a couple of weeks ago I started noticing buttons for Quilty 365. I followed the links and learned about the circle project Kathy over at Quilty Folk has begun. 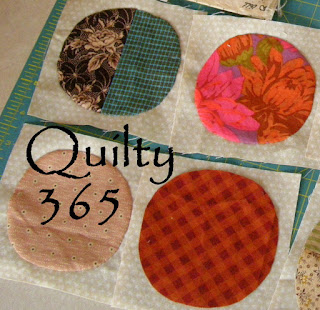 I like the concept of a daily record in fabric for a year of life but circles and applique are not for me at the moment. I spent several days stewing over ways to adapt this project to my own style and taste. I came up with a couple of ideas I thought were workable but finally decided to just cut a 2.5" x 6.5" strip each day. I considered assembling the strips into blocks but decided on columns for an eventual strippy format quilt. I'm not sure exactly how many strips will go into each column or how many columns there will be in the end but I can work that out next November. ;- )

Obviously the first strip had to represent all the figuring I'd done before the project even got underway. 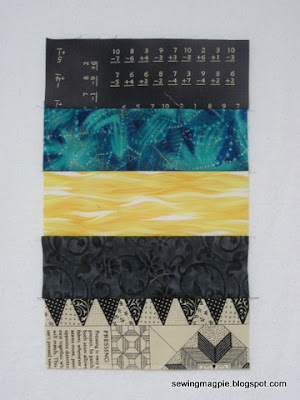 The next day was wet and stormy, blowing the spider webs in the hedges all over the place. The yellow strip is for Mr. Bingley. That was the day he passed away. I may yet ink his name and dates on the strip, I haven't decided. The bottom strip in the photo above was to celebrate the fact that I'd actually done some sewing that day. 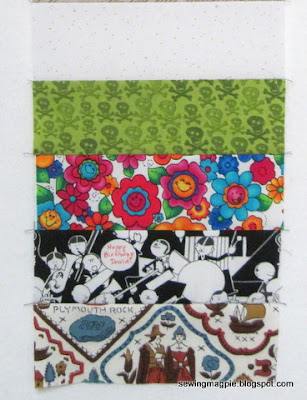 I've chosen to use white prints for Sundays. I plan to either ink or embroider a scripture reference on those strips. I felt truly ill on that Monday but much better on Tuesday. My son who played the tympani in orchestra had his birthday on Wednesday. I found the perfect vintage print for Thanksgiving!

So far it's been fairly easy to choose an appropriate print for each day. I have a sinking feeling that may already be at an end. I'll have to come up with a back-up plan for those days that have no stand-out experiences I guess. Maybe just a strip of whatever fabric I used that day. 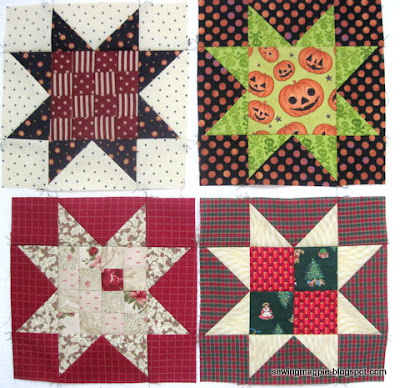 I'm pretty sure I'll be making them next year as part of my participation in the RSC16. I may actually make the blocks that Angela has chosen for the year too. There are going to be more Ohio Stars, primarily in orange I think. And there will always be six inch Shoo-fly and Hole in the Barn Door (or Churn Dash) blocks! 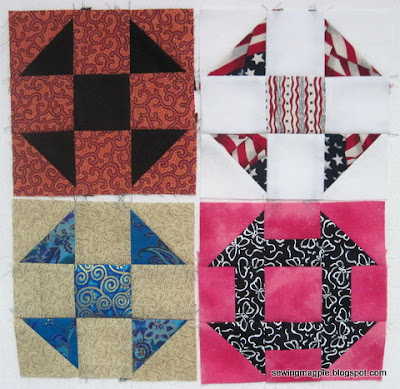 I'm linking up with the other rainbow bloggers over at SoScrappy.