I don't know whether I'll be able to show you what I've been working on of late. There seems to be a glitch in the process for uploading photos...

Ah ha! Guess I get to do everything in HTML today. Not being a code nerd this isn't the way I would choose to work but if it gets the job done I guess I'll have to make do.

This block pretty much represents the way I've been feeling lately. I don't need any extra challenges, thank you very much. 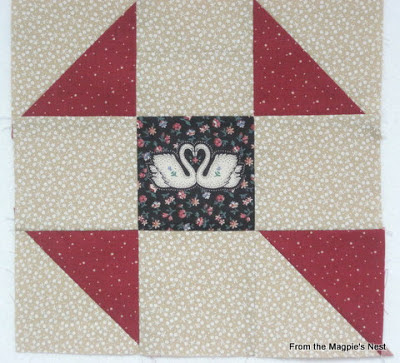 I had a really good day on Monday. Wish I could figure out how to make that happen more often!

There's been slow but steady progress on the row-by-row quilt that began out of my Parts Drawer. I chose to offset the 9 inch liberated stars within a twelve inch row. Once I had the ten inch tulip blocks set in a row I added a one inch strip on either side to bring that row up to 12" as well. The Bow Tie blocks were set into 12" X's, and the dark Churn Dash stars were also framed up to a twelve inch row. 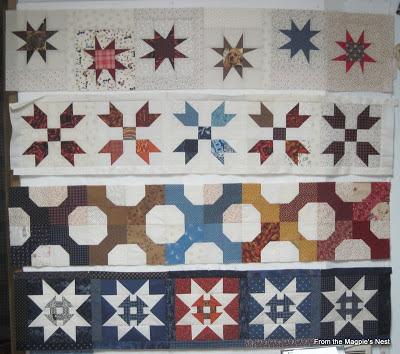 At that point I decided to just make all the blocks into 12" rows for ease of assembly. The 9" Shoo Fly blocks were offset the same way the liberated stars were. 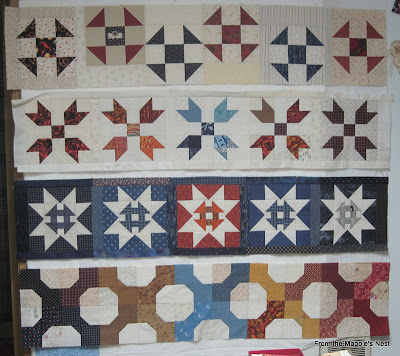 A lot of time has been spent trying to figure out how to arrange the rows to accommodate that single really dark row (the Churn Dash stars). While most of the rows have a light background, that one and the Bow Tie X's read as dark and medium respectively. That made it a challenge to balance out the values over the surface of the whole quilt top. Once I assembled the six inch Shoo Fly and Hole in the Barn Door blocks into two additional rows (that I left at 6" each) I was able to move things around more easily and get a better idea how the whole would look. 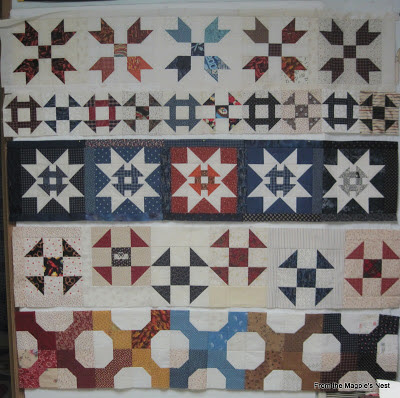 I think this is the final arrangement for the upper half of the quilt top. Below the Bow Tie X's will be another mixed row of 6" Shoo Fly and Barn Door blocks, then the row of liberated stars. For a time I thought I would be making dark sashing strips to go between certain rows. Yesterday I decided to just piece my short bits of 1.5" strips together end to end and use that for sashing between all the rows. 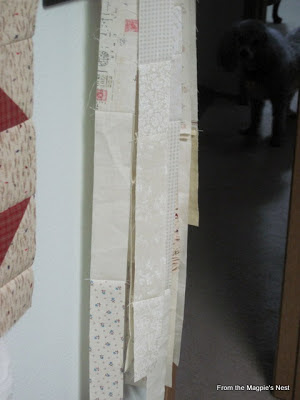 The next step will be to lay the rows out on my bed and decide which sashing strip goes where. After that it will be time to figure out what to do about a border. I need at least a 3" border all the way around to achieve twin size status. And in spite of all the fabric I've added to my stash courtesy of year-end clearance sales, I don't think I've got anything that precisely fits the bill!