Two More ATC's for the BJP

I don't think I ever shared my finished bead journal project for February. This one documents the hours I spend reading and journaling, my little dog never very far away. My original idea for this year's Bead journal Project was to make a series of card cases, which turned out to be the same size as ATC's. The first hurdle is always coming up with a design to execute. That wasn't nearly as big a challenge as finishing the cases turned out to be. I was less than satisfied with the results of my January BJP so I tried something a little different this time around. 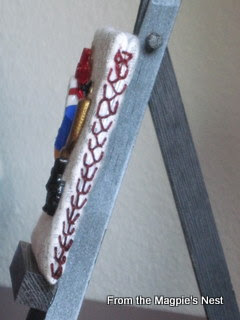 I like the feather stitching up the two sides better than the blind ladder stitching I did on the first one.

I brought Mr. Bingley home in March so he became the inspiration for that month's BJP. (I still can't get a good picture of him!) 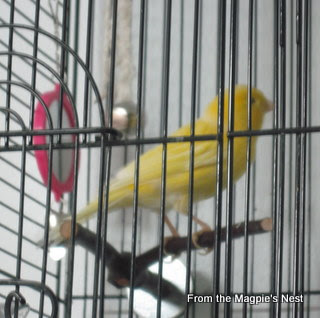 By this time I realized that the finishing process was keeping me from even starting new BJP's. I decided to bow to reason and finish them the same way I do postcards or the ornaments I made for last year's BJP. But with this one I had the opportunity to try another approach because the fabric foundation was still double the length it needed to be. I trimmed it down but left enough to wrap around the piece of Peltex I use to stiffen my fabric cards. It was tricky to keep everything in place while I topstitched it all together. 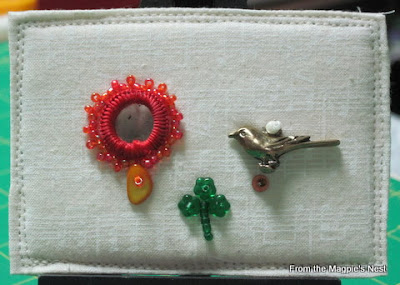 It also looked kind of naked when I was done. That's partly due to the lack of beading or stitching but in this case I wanted the foundation fabric to really be part of the final design. It's a music print. This whole card is meant to represent Mr. Bingley in his cage, singing to "his buddy" in the mirror. I used a few green beads to create a shamrock in honor of the month of March.

After I sat with this a few days it occurred to me that I might be able to use the blanket stitch on my sewing machine around the perimeter of the card to suggest the bars of Mr. Bingley's cage. 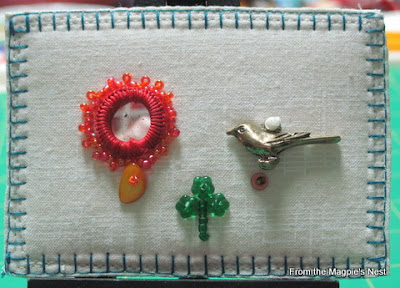 I set the stitch for as wide as it would go and used a contrasting thread. It turned out pretty well, all things considered. The card still looks a little naked when you see it with the others I've made but that frame of stitching really helps. I like it better now.

You can see my Bead Journal Project for January here. These two are for February and March respectively. I've also shown you June and July. I've been working on April during the unplanned blogging break I just took. I have an idea for May but haven't been able to find the right focal element. I may have to resort to Plan B for that one. I have a strong feeling I'm going to have to do something, anything, soon because I don't think I'll be able to move on to another type of project until I finally get myself all caught up on this one!