I'm still trying to learn how to get the best pictures with the camera feature of my new phone. I've turned off the flash. Things are still looking pretty yellow. Of course, in this case it could be due to the light print I used in the blocks. It's a sand color, with a yellow undertone.

The blue border is more of the holly print that was the central patch in the individual blocks. I felt there needed to be a bit of blue to frame the nativity panel too so I made a flat piping of the other blue print I used in the blocks. 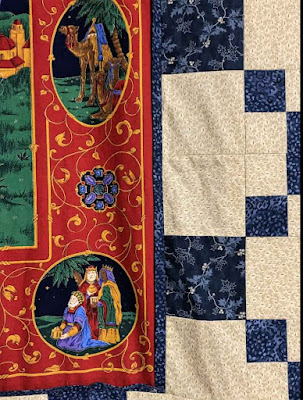 I've even made a back for this top already. 😀 It's another holly print but in traditional green and red on black. Another print that's been in my stash for years. I did not think to take a picture of it.

The other quilt for Christmas is the one that began with this panel: 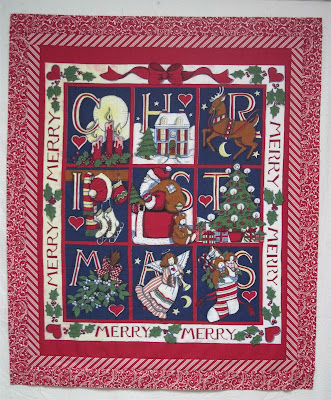 I added the candy cane stripe and the red print to the original panel. I decided this one was going to have a horizontal format. All the blocks I make will go on either side of this central panel. I had to establish the height I wanted so I would know how many blocks would be needed for each side. That took a couple of days to get sorted. In the end I found a large-ish scale print that just made me smile when I held it up to the bottom of the panel. 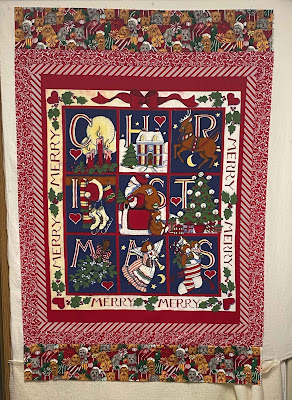 I have these stars so far: 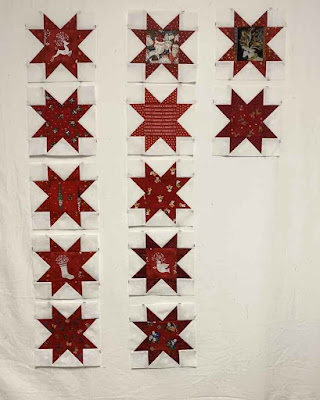 I'm trying to use up my old yuletide prints (and a few new purchases). Turning some of the yardage into Swiss cheese by fussy cutting makes it easier to cut what's left over into scrap patches. 😉 I need a few more stars, and then I think I'm going to choose another block to fill out the width I'm shooting for. They will continue the red on white color scheme though.