After I posted for this month's Scrap Happy Day (previous post) I realized I hadn't shared the miscellaneous scrap blocks I've made since Scrap Happy Day in December. A couple of them were Ship blocks that I put to use in this new Parts Department Quilt project. 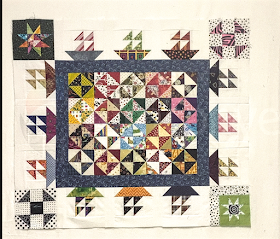 But I'd also assembled two Lego blocks, more Ships, and a few Hole in the Barn Door blocks. 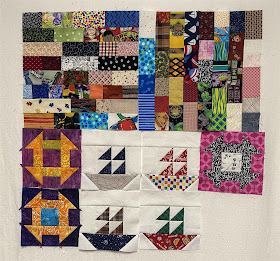 You may be able to tell from the photograph that I have a screaming headache this morning. And that's after I straightened it in my editing program! These are some of the first pictures from my new smartphone too. My old digital camera has taken to eating batteries. That was one of the factors that prompted the purchase of a smartphone finally. I find it interesting that the photos are coming out much more yellow than those from the camera. And that's after editing. I haven't yet found a way to whiten them up. Oh well. It's a small thing that probably doesn't matter in the long run.

Speaking of white, we've had a couple of snow days this week. The kind that keep the smart people off the streets and close schools. 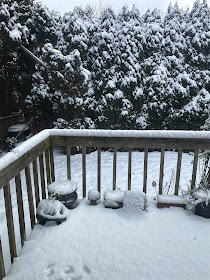 Something about that snow day caused me to do this: 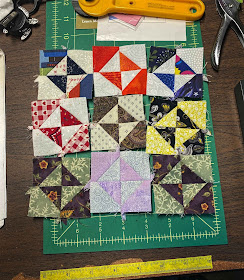 More of those tiny  2" Broken Dishes blocks. But look: 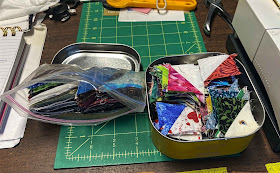 I have "just a few" more half-square triangles to play with. I may end up sewing a bunch more today if this headache doesn't back off soon. I need a mindless activity to help me cope. Everything else I have in the works requires decisions to be made before I can move it forward. Maybe having a headache won't be such a bad thing after all... 😉