Last month/last year I decided to participate in Susan's Advent Challenge for the first time ever. The goal was to make a block for the quilt of your choice each day of December leading up to Christmas and then to assemble the blocks into a top between Christmas and New Year's Day. I chose a simple block in only two colors (two blue prints and the ecru background) with the idea to use them around a Nativity panel I'd had in my stash nearly forever. 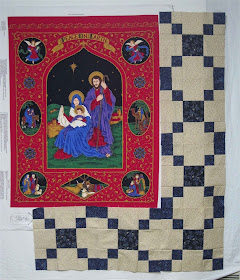 I did not make a block a day but I did manage to make six blocks per week. Between Christmas and New Year's Day, however, I don't think any sewing of any kind took place. We had the grands over for our gift exchange on Boxing Day and then I watched the Rose Parade on New Year's Day before we began our annual movie marathon. Those are my only two official excuses. There must have been other extenuating circumstances, I just can't remember what they were. 😉

I finally got my act together the other day and put the blocks back up on the design wall with the panel. I really wasn't sure what the final layout would be. Kate left a comment when I first showed this project that caused me to put the panel up in the corner of the prospective quilt top rather than centering it as I would normally have done. 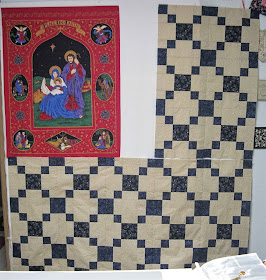 I knew I would need to come up with compensating blocks or some other method for filling in the gap (wherever it ended up being in the layout). Nothing I've thought about for an alternate layout has taken hold. I want to make partial blocks to fill in that empty space you see on the wall but I'd run out of two of the prints featured in the blocks. Fortunately my LQS still has it in stock so that purchase has been made. All I have to do now is get those small cuts washed and pressed, cut some squares, and we'll be good to go. You may not be able to see it in the photos but that's a medium scale blue holly print in the center of the blocks. I'm planning to use four inch strips of that to border the whole top to make it a bit bigger. I think it's going to finish around 60" x 72" in the end.

While it feels good to finally be doing something with this panel I've been reminded that controlled palettes are not my thing. It was fine to have mindless sewing to do in the run-up to Christmas but now I'm having to push myself to keep this from becoming a UFO. I'd much rather be building a scrappy quilt. I cut a bunch of background patches for scrappy Ships to sew up between seams as I assemble this top. That will help. I also have a couple of other piecing projects I've begun that I will have to share in the days to come. The trick will be to not let them take over before this top is complete!